I am one of the six people in the universe who owned a Sega Genesis (two actually) and never played Earthworm Jim. I had probably 40-60 Genesis games over the lifetime of the system (that's a conservative estimate, btw)...and somehow, Earthworm Jim never made it into my home. I was aware of him. I knew he used his head for a jump rope and everything....I just never bothered to play his game. See, when I was a kid...there was no such thing as Gamefly, Ebay or a "Used game store". I also had to walk to school barefoot, in the snow, in California, uphill...both ways. When I bought a game, it was almost always brand new at the store...because "used" cartridges were dirty, smelly...and I didn't want them in my console any more than I wanted used gum in my mouth.

Shoving my poor, miserable, non-Earthworm Jim owning childhood aside, I booted this one up today and decided to see what all the fuss was about. In 1994, this game might have blown my socks off, but today, it definitely feels dated. I don't like it as much as my favorite Xbox Live Arcade platformer (Splosion Man) but it's ok.

In case you're one of the other 5 people who doesn't know about this game, you're a worm...that finds a super space suit, and heads off on an adventure to save a princess. You do all of this with only one continue, and there's not a lot of help on screen, so if you get stuck on a puzzle or something...your only option is to die and restart. That got old.

I got to ride on a rocket through space, I rode a hamster through one of those hamster cage tube things....and at one point, I drove a submarine until it folded on me. Some of the bosses have included a cat, a fat guy hanging from a clothesline, and I'm only to the 4th or 5th level. It's definitely got some potential.

Overall? I'm going to give this a 6/10. Just slightly above average. It might have been a 5.5, were it not for the fact that the game has avatar awards, and my avatar is now wearing a free Earthworm Jim T-shirt. I like that. Apparently, if I make it to just one more bonus level, I get the Earthworm Jim spacesuit. Now that, I'd love.

I like this game, and it's worth playing....it's just not worth losing your mind over. If you were a fan of this game in the 1990's, you are in for a treat. The graphics have been updated a bit, and it's got Xbox Live for God's sake! If you are like me and you missed this one, it's still a decent game...especially for the price.

Achievements? Yup. Here are a few I've earned so far. Some of the remaining ones are pretty creative, and I also thought the first one I earned was pretty funny. :-) 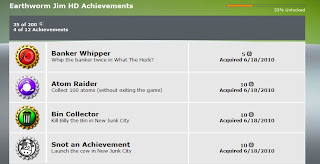