"Isn't he a snowboarder?" I thought to myself.

I seem to remember Shaun winning a gold in the olympics, and it wasn't for skateboarding. Thanks to Al Gore, I was able to look this up "online", and sure enough...turns out the guy is a pretty awesome skateboarder too. Remember when Michael Jordan wanted to be a baseball player? Remember how much he sucked at it? Well Shaun White is the "Michael Jordan" of snowboarding AND he's a skateboarder coming out with his own video game now too. Not bad.

So how's the game? That's going to be a little tougher to answer.

My favorite snowboarding video game of all time is SSX for the Playstation 2. It's just about as perfect as snowboarding games can get. Amped for the Xbox was a close second, but most every snowboarding video game I've played pales in comparison to the fun I had with SSX, including the sequel ("Tricky") which came out for the Xbox, Gamecube and PS2. I used to play the original SSX for hours and hours, and for the first 6-12 months that I owned my PS2...it was really the only game worth playing on it.

Shaun White's game simply can't compare to SSX, no matter how awesome he is at snowboarding in real life. I'm simply not a fan of the controls in this game. I was able to figure out how to do a few tricks, and all the basics....but it lacks the adrenaline that SSX still gives me any time I play it, even today.

There are cool features in Shaun White snowboarding. For one thing, you can throw snowballs at the other boarders. I thought that was fun. There are chair lifts to the top of the mountain (also cool) and a helicopter that will take you places if the chair lift isn't your thing.

Like most "licensed" games, there are a group of pros you'll have to do tasks for and impress before you can skate against Shaun. I was expecting this, but after doing my first few challenges (which consisted of doing tricks to find hidden coins around the mountain)...I decided that maybe I didn't care so much about meeting Shaun anymore. I'm sure he's a nice guy, but does he really need me to find all 12 coins on a mountain just to snowboard with him? I'll bet I could meet him in real life by simply attending a snowboarding expo and getting in line. Maybe I'll do that someday, because I don't plan on collecting any more coins in this game.

Overall score? 5/10. Sorry Shaun, but there's nothing about this game that makes me want to play it instead of SSX Tricky. That game is ten years old, but if someone came over and asked if we could play a Snowboarding game, that's what I'd boot. If I couldn't find it, I'd probably boot Amped instead. :-)


Achievements? This is not the game for folks looking for some quick gamerscore. These suckers will take days, maybe even a week of straight playing. You have to beat EVERY event, do EVERY trick and find EVERY collectible on all the locations to start earning stuff. Then you have to do it all over again online. They do not sound fun at all. I got a handful, but I doubt I'll ever get more than I have right now. 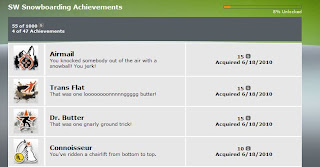