Video game number one hundred and sixty: Ratchet and Clank: A Crack in time

Video game review number one hundred and sixty in my 365 Games in 365 Days project is"Ratchet and Clank: A Crack in Time".

Ratchet and Clank is the best game I've ever played on the Playstation 3.

Until now, I haven't been a follower of the series, but this one has gotten some really high ratings and I had heard it's a great platformer...so I decided to give it a try. I am very glad I did.

You start out with a decent explanation of what's going on in the story. Ratchet (who is some sort of animal called a Lombax) and Clank (the robot) are separated, and you're going to need to reunite them. There's also some conflict going on in the universe that you'll have to handle. This is the basic plot of almost every good platformer out there, but the execution is what makes it awesome.

You collect bolts as you go through the game, and spend them to power up your weapons. Again, basic platformer stuff, but done in a way that it's fun. You can hit plants to get bolts, you can beat enemies or solve puzzles....it's just, fun. So long as you don't run right through the game....you don't often end up short of money, and I like that.

Once you've collected the money, you need to spend it on weapons and armor. Some of the weapons are fantastic. My favorite is an angry little robot (who acts as a turret for Ratchet) named Mr. Zurkon. For a short amount of time, he'll fly around the screen shooting your enemies for you. He spouts off all sorts of stuff as he does, including my favorite line of his: "Mr. Zurkon does NOT come in peace".

As Ratchet, you have a spaceship, which you fly from planet to planet. On each planet, there's a new adventure, and there are several moons around each one you can explore to find items and power ups. Unlike many platformers, you can easily go back to previous planets to find stuff you may have missed, or just play a level again. This is cool for many reasons, but especially because you'll eventually gain access to equipment that will allow you to find new hidden items on a level you've already been in. Hello replay value.

As Clank, you're stuck on this "Clock" thing, which is apparently going to be the main destination for every character in the game. This clock keeps time for the universe, but the bad guys all want to use it to CONTROL time. Apparently, they've never seen Back to the Future 2 and taken notes on how badly that idea works out for Marty McFly.

Clank's levels are a little different because they focus less on the combat and more on puzzles. It's a great mixture of gameplay when you go from a Ratchet level (which will be all about weapons) to a Clank level, where you're asked to solve some puzzles. Clank has lots of "time" puzzles....which reminded me a lot of another game I reviewed earlier this year. Controlling your character, you'll record the actions of Clank, doing one half of what is basically a two person puzzle. You'll then use another button to playback that recording and use it to help your "current self" open a door. It's difficult to describe and sometimes confusing, but a lot of fun.

The music in this game is great, the story is keeping me interested. The humor made me chuckle more than a few times. I enjoy the combat, and just when it's starting to get a little repetitive, you'll unlock a new weapon (or a power-up for that weapon) which makes it interesting again. No two bosses have been the same so far, and each new level has offered some new aspect of gameplay. It's rare that a game is able to throw so much new stuff at you and succeed, but this game does it. Whether you're on land, in "hover boots", in space, or playing in the dream world of Crank's subconscious mind....it's quite the adventure.

Overall score? 9.5/10. This is by far my favorite game on the PS3, and definitely one of the best I've played all year. I rented it from Gamefly, but I think I'll probably end up buying it to keep in my collection. It's that good. If you own a PS3, you should get this game.

Trophies? Here's what I've unlocked so far. There will be many more to come. 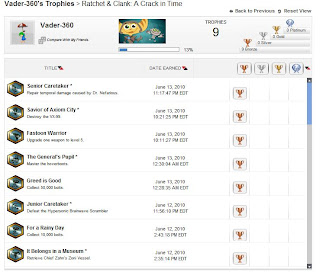