Video game review number sixty nine in my 365 Games in 365 Days project is "The Misadventures of P.B. Winterbottom".

In the last month or so, there have been a couple of fantastic games released on Xbox Live Arcade. Scrap Metal was my favorite, this one is a close second.

From the opening splash screens and creepy music (which reminded me of the haunted house ride at Disneyland), this game immediately grabs you as something a little bit different from what you're used to. The first level is a tutorial of sorts, where you are taught how to move around. Simple platformer, you can jump, run and hit. You can also do a floating jump with your umbrella, but that's about your most complex move. Next, you learn that this entire game is about chasing down and collecting pies. I support this premise. Finally, you learn about the coolest feature in this game: You can clone yourself.

Let's say your character needs to get up onto a ledge with a little see-saw next to it. You're all alone, so you can't jump up there, but you can make a little recording of yourself jumping on one side, then play it back in the form of a clone. All you have to do is stand on the other side of the see-saw, and that recorded clone will boost you where you need to go. Some levels only allow you one clone, others give you 5 or 6, so you can get into some pretty deep strategy here.

The game sports simple controls, but very challenging puzzles. Together, they are a great combination of fun and difficulty. I played a level where you had to flip a switch with one clone, launch yourself into the air with another, then collect two pies while floating in mid-air. To make it even more complicated, the pies were only visible for a short while after you hit the switch, so the timing needed to be perfect. I also needed to spend a few tries making sure I had the placement of the clones just-so. It took me several attempts to figure it out, but when I did...it was a very satisfying feeling. I can only compare it to spending several minutes lining up a stack of dominoes before knocking them over with a chain reaction. The game takes a little time, but when you finish each level....you really feel like you accomplished something. It's fun to watch your solutions play out once of you've triggered them.

The game has rails, but you certainly don't feel like you're riding on them. Many puzzles have only one solution, but your approach to figuring it out can be attempted in whatever order you choose. The investigation is half of the fun...and I think that's going to turn the replay value up to 11 for me. I've already found myself playing this one at work during phone meetings...which is always a good sign. :-)

Overall Score 9/10. I really don't think there's much more you can ask for. It's fun, but challenging, the replay value is there (once you find the solution to a level, you can spend time trying to solve the puzzles faster for achievements). It's just a great little game. My only complaint with it is that there's no multiplayer component, meaning that eventually...I will beat it and be done with it. Obviously, that doesn't affect the score much...but it does have an effect.

Here are some achievements I got so far...I plan to keep on playing this one for quite awhile. 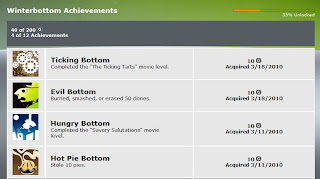 OMG, This is finally out? YAY!!! I have been saving the Microsoft Points card I got for my birthday to buy this one. I'm so excited!!