If there's one thing I've learned from all the Street Fighter sequels I've played over the last few years it's this: I'm not good at Street Fighter anymore. I've gone on and one about my love for Street Fighter 2 in past reviews, so this game was an obvious "Must Play" for me. Unfortunately, when I started playing the latest one...I realized that the series has beyond my limited skills, and as a result, it's not really something I enjoy much anymore.

Super Street Fighter IV features 35 characters, half of whom I've never heard of. I stopped playing the Street Fighter games religiously after the last one in the "Street Fighter 2" series was released. Despite my apathy around half of the cast, there are still plenty of characters that I remember in this game, and I picked a few of my old standbys and started fighting.

The combat is great, the graphics are beautiful...and I did all of my gameplay today with this handy-dandy fighting stick I was able to borrow: 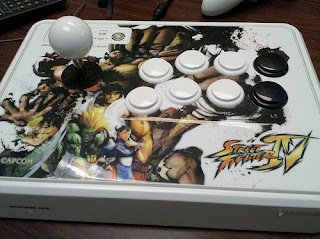 You'd think the combination of old favorites, great graphics and an awesome controller would make this game fun, right? Meh.

While I'm still proficient at most of the special moves for the folks I know, they all have these new super combos and finishing moves that I haven't learned how to do yet. Unfortunately, these are absolutely vital to the gameplay. They're as important as regular special moves were to the old ones. You can pick Ken or Ryan and do 20 dragon punches, and it'll have about the same result that button mashing had on the old Street Fighter games. Alternatively, you can do one of the ultra moves, and it will drain 50-75% of your opponents health. Your combo meter builds up through blocking, but a lot of the time...I didn't know the new moves by heart, so my meter would just sit there full and blinking. It was kind of pathetic.

I spent some time practicing the specials for some of the characters I knew, and I'll admit...the moves were fun to pull off when I finally got them. In the end, I really liked the graphics, but the fighting system has evolved beyond my existing skill level. I wasn't interested in learning new button combos for my old guys (it would be like picking up a Mario game where you had to do a ton of 6 button combos just to throw the fireball you used to get for picking up a flower). I suppose the expression "can't teach an old dog new tricks" applies here.

There's a great online mode, where you can play against people...or just play in the single player arcade until someone calls you out for a fight. It's all rather instantaneous and much better than older versions of the game. Too bad I got completely owned each time I played online. It's those damn supers. :-)

Overall score? Honestly, I think the game is probably the best Street Fighter sequel I've ever played. That means it should deserve a 10/10 right? Wrong. If I was being objective, maybe...but these reviews are all about my personal experience with the game...and this one feels more like a 6/10 to me. Sure, the graphics and presentation here are great, and the game has a TON of features, but my enjoyment level brings the score down considerably.

I'm simply not a fan of how much the difficulty has been cranked up, and I'm not familiar with the lion's share of the new characters they've added since my glory days in the 90's. I'm sure many people have been following Street Fighter for 20 years, and those folks will LOVE this game. Me? I just suck at it...and I have no interest in learning moves for the 20 characters I don't know just so I can stand a better chance playing with the 18 I'm familiar with. I liked seeing the updated graphics in the levels I've come to know and love, but ultimately...I'd rather just play the version I already own for Xbox Live Arcade. Old school represent. :-)

Achievements? They're all centered around beating the campaign on high difficulties with every character (some without ever dying or continuing). I wasn't even able to beat the campaign on medium (I kept getting my ass handed to me in fights against the last few opponents). They have some for winning bunches of matches in a row online, but with my outdated moves list, I wasn't able to win online. All I did was get owned over and over again, and sadly, there aren't any achievements for that. Here are the few I earned. :-) 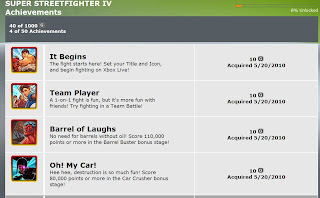