My one sentence review: Metal Slug is an updated version of Contra with better graphics.

The long version: Back in the 90's, SNK game out with the Neo Geo console, and priced it between 600-700 bucks. I was a high school student with a job in a restaurant at the time, so transferring today's money into the currency of the time, this was the equivalent of about six billion dollars. Each game for the Neo Geo was priced over 200 bucks, and the single selling point for the thing was that when you bought the games...they were the EXACT same games you played in the arcade.

While it would be nice to own an actual arcade machine, 650 bucks was so far out of my reach at the time that it was silly. In 1990, I was taking the bus to school, and spending whatever spare cash on more important things (like going "off campus" to eat lunch, or renewing my Nintendo Power subscription). I bought plenty of video games as a teenager, but they were always one at a time. If ever I had 850 bucks burning a hole in my pocket, at the time, I probably would spent it on a car. In fact, thinking about it now, aside from cars, I don't think I owned a single item worth 850 dollars until I was 19 and saved up to buy my own computer.

I suppose it goes without saying that because I never owned the system (or this game), my only exposure to it was in the arcades. The Metal Slug series was among the better games on the Neo Geo, I'm sure I sunk quite a few bucks into these games over the years. When they were eventually ported to consoles like the PS2, I never bought them...but now that Metal Slug XX has been ported to Xbox Live Arcade (with achievements), I had to give it a try. This game does not disappoint.

Right off the bat, the gameplay is familiar to anyone who has ever picked up a controller. Jumping, shooting and driving are your standard side-scrolling stuff, and there are a zillion enemies to kill. On each stage, you rescue hostages, collect power-ups and eventually make your way to a huge "boss", who is excellent at killing you. Luckily for you, the continues are unlimited and so you can do lots of trial and error.

I played this sucker from start to finish in one day. There are plenty of achievements that can be earned for beating it without continues (I have no idea how one would ever achieve that), or for beating it on hard...but I'm happy having gone through it once. It reminds me of the arcades, or older side scrolling shooters of the 90's. Good, good stuff.

Overall Score? 7.5/10. I liked this better than the bulk of arcade games I've played lately, enough to get all the way through it. I can't say it has a lot of replay value for me, because I won't be grinding through the different difficulties or trying to beat it without dying....but it was a lot of fun while I was playing. 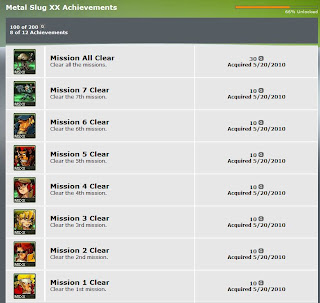