Stop the presses, we have a late update! Apparently, in my rush to reviewing 365 games...I've somehow missed one along the way. Turns out, it's one I've really been enjoying too: TMNT. I started playing this last month, but rather than go back and re-number all my reviews, I'll just throw this one in the mix now.

First of all, I should give this game a zero because it doesn't include Vanilla Ice OR his ninja rap song. It almost seems like that HAS to be in any game about the Ninja Turtles.

This game was a movie tie-in for the newest turtle movie (which I never got around to seeing), but the graphics seem to be in line with what I saw in the commercials. The story is decent enough, it's set after the previous two films...and the turtles have grown apart a bit. Raphael is off doing solo missions as a vigilante called the "Night Watcher", Leonardo is training with Splinter and the other two turtles have taken up day jobs. Michelangelo drives a party van and Donatello is a scientist. It's actually kind of funny to see what super heroes decide to do when they're no longer being super heroes. This game sort of made me wonder what other video game characters might do if they lost their day jobs.

Mario and Luigi would obviously have to go back to fixing toilets.
The guys from Call of Duty and the Master Chief from Halo would all probably be in some sort of therapy after killing all those people.
Pac-Man is probably much larger and rounder now, after all those dots he ate. He's probably divorced from Ms. Pac-Man and their baby probably grew up as a spoiled rich heiress. She's probably hooked up on power pellets.
Dirk from Dragon's Lair probably works at Medieval Times performing nightly for tourists.

The game is narrated by a turtle at all times. Sometimes it's just the turtle you're using on the current mission, and other times, all four of them are cracking jokes about whatever is happening on screen. It's actually pretty funny most of the time. Those turtles are pretty funny guys.

Ordinarily, a game like this might be something I'd pop in for awhile and get tired of, but this is actually a pretty good action game. Every level you encounter involves a lot of enemies to fight, special movies and even some jumping puzzles. It reminds me a lot of the games of old...and that's a good thing.

Each turtle has a special move, and you can also "hot-swap" your turtle of choice. If one is getting killed, eventually..you'll earn the right to jump another one in. If you need to cross a large gap (rooftop to rooftop maybe?) you can use one turtle to fling another one across the screen and make the jump. All in all...I think they've made the best turtle game ever here, and I'm including the classic arcade game I loved as a kid. That was awesome...and this one just takes it to the next level.

Overall Score? 8/10. I really enjoy this game. It's a kid's game, but it doesn't play like one. It's not quite Lego Star Wars, but it's better than most action games I've played this year. So far, I've made it through the first 12 levels already, and I plan to beat it, possibly by next weekend, but definitely sometime soon.

Achievements? TONS. I think I could actually get all 1000 if I took the time to try and make it through a level without being hit. Not sure if I'll want to grind that one, but I may give it a shot. We'll see. 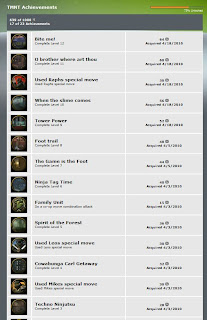