This is one of those games you'll hear is good...and hopefully you'll get around to playing. I know it's not as flashy as a Call of Duty or a Grand Theft Auto, but as far as single player campaigns go, it's one of the better ones you'll experience. It's not the most hyped title this year...but I think it should be on everyone's "Must play" list.

This holiday weekend, I sat down with Heather and we started playing through Alan Wake. We had a few Netflix disks we could have watched, some stuff on the DVR, but we decided to give this game a try instead. I had heard that the story was like watching a movie, and that wasn't a lie.

In the first day of gameplay, we made it through the first two episodes. That's saying quite a lot because each episode is composed of several different story elements, and it can take hours. Heather was right there with me, the whole time...helping navigate, pointing out secrets I was missing and trying to unravel the mystery along with me. Normally, I don't play on the Xbox in the living room when she is home...but this is one of those rare games that she was interested in, so we played it over a period of 2 days from start to finish together.

You're a writer, on vacation...when you find yourself in a scary situation not unlike those in the stories you write. The plot twists and adventures you encounter along the way keep you guessing...and it's definitely something I got hooked on. As far as the gameplay itself goes, this is an action game. Your main weapon it turns out, is a flashlight, and you have to shine it on enemies you meet in the dark to weaken them, before you can shoot them with one of your many guns. Without the flashlight, your gun doesn't do much...and you have no hand to hand combat skills, so you really need that flashlight and as many Energizer batteries as you can collect.

Most of the action takes place at night, and when it's light out...you'll learn new things about the town you're visiting and the mystery you're trying to unravel. I'd really like to talk more about that, but I don't want to write any spoilers. Suffice it to say, from the opening credits to the end of the game....there was never a moment where I truly had the ENTIRE plot figured out. It's pretty good.

I chose the normal difficulty, and it was still pretty challenging in parts. We played through the whole game from start to finish in 10-15 hours, stopping along the way to listen to all the optional side conversations, TV shows and radio programs (just like Bioshock). When the game finally came to an end, they leave room for more...and I'll definitely be interested in picking up the DLC levels when they are released later this month.

Overall? 9/10. The graphics are good but not amazing. There's no multiplayer and the combat could be better....but despite those small flaws, this game is great. The story is awesome, it's a fun action game, and it kept me hooked for hours and hours. At one point, my wife and I actually turned down an invite for a steak dinner to continue playing so we could see how the story ended. Any game you'll give up steak for is automatically awesome.

Achievements? I got so many I couldn't get them to fit in one screen, so I just copied the last few...

Great story.
really annoying how often you run out of ammo. 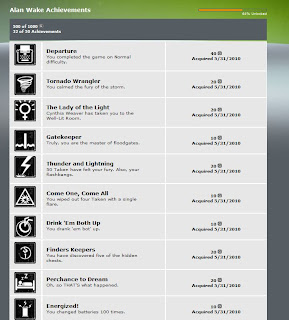