I was a little hesitant to play this game before I saw the movie. I figured I'd boot it, and if it was giving away too many spoilers, I'd stop. I got into the second level before I felt I was learning too much about the plot of the upcoming movie (recognizing things I'd seen in the trailers), so I'm going to have to come back to this one a little later.

But I think I will be coming back...and that's the important part of this review.

This Shrek game is actually pretty good. You can "hot swap" any of the four main characters (Shrek, Donkey, Fiona and Puss) by using the D-pad, and you'll do so quite frequently, as each of them has a unique power. Donkey kicks doors down, Shrek moves things with his strength, Fiona has fire, and Puss can climb.

As you make your way through the first level, you'll come across a cart of barrels that Donkey needs to kick, or a box Shrek needs to move. It's not really a "puzzle", but I can see how it would keep kids busy hot-swapping.

The combat is ok for a kid's game. I fought a bunch of pumpkins and some of the king's guards. None of them were terribly difficult (think "Lego Star Wars") but it was still fun.

Overall Score: 7/10. A little better than average, this seems like it's going to be a pretty fun game. I want to go see the movie before I play anymore of it, but I plan to keep playing afterwards. 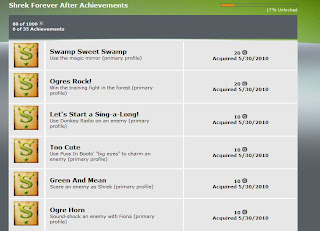