Video game review number one hundred and forty two in my 365 Games in 365 Days project is "Prince of Persia: The Forgotten Sands"

I've seen many great reviews for this one and in a lot of ways, they're deserved. The game has beautiful graphics, a fairly interesting story...and the controls are pretty good. The game also does not star the guy from Brokeback Mountain, opting instead to give the Prince his own unique look. That was fine with me as well.

So will I be snuggled up in a tent with this game sobbing "I just can't quit you!" until I finish this campaign? No sir.

This game has one fatal flaw that bugs the heck out of me. It's based almost entirely on jumping puzzles. Yes, there is combat (and the combat isn't half bad), but in order to get to that combat....you have to jump, run on a wall, swing on a pole., then climb a ladder. Once you've finished the fight, you rinse and repeat. Forever.

I've never understood why the Prince can do all this thirty stories above the ground, but he can't just climb down and walk through the gates he needs to pass through. The gameplay reminds me a lot of what I hated the most about the first Assassin's Creed game, where every single kill you got involved climbing a tower and jumping down into a haystack first.

I'm not saying I hate this game, hell...I might even spend some more time with it if I'm feeling bored someday ,but with SO many good games to play right now....a jumping puzzle game just isn't at the top of my list. Frankly, if I want to play a game with lots of jumping puzzles...I'm going to finish TMNT first, which I'm so desperately close to beating. Speaking of which, as I was about to link it above, I realized that I somehow forgot to review that one...and so now I have to go back and write one in retrospect. Crazy. Looks like I WILL be playing Turtles again very soon. Cool!

Overall score? 6/10. Perhaps I'd like it more if I sunk more time into it, but in order for me to do that these days, a game has to really grab me, and this one has not. I may play it again, but only after I've gotten my project back on track (I'm currently about 8 games behind my quota for the year) and only after I've played a bunch of others I really want to spend more time with first. Including TMNT.

Achievements? Here they be: 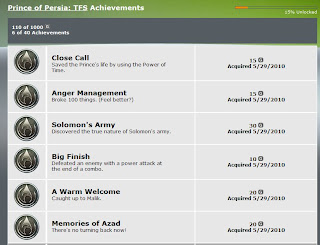