Video game review number one hundred and seven in my 365 Games in 365 Days project is"Ninja Gaiden 2".

I actually got this game a couple of years ago, and it's been on my shelves waiting for me to play ever since. I suppose I should have played it before now, but the original Ninja Gaiden was one of the most difficult, time sucking games I ever played on the original Xbox and I heard this one was even harder. I had always planned to give this one a shot when I had like....a month with no good games to play. Maybe over a Christmas break. Got it in 2oo8, so obviously I've been waiting quite awhile. Today, I decided to crack the plastic and give it a try.

This game features A ton of special moves, great graphics, awesome cut scenes and Sonya from DOA as the damsel in distress. That's never a bad thing.

The Bad: The special moves are fucking difficult to remember and absolutely necessary to pull off in some situations, making them annoying. This game features a pretty terrible camera, making even the easiest jumps a pain in the ass to pull off. The combat system is defense and special move heavy. What this means is aside from remembering a dozen different "combo" things, you have to block CONSTANTLY.

There are always 8 enemies around, so this can be a pain in the ass. Last, but certainly not least....a lot of times, you'll either button mash or combo your way into doing something you had no intention of doing. For example, I have absolutely no idea how I killed the first boss. One second, I was slashing at him, and then suddenly, I did something and he was dead. I wish I knew what I did.

I played this for several hours, and even though I was having a good time WATCHING the game, I realized...I wasn't really having fun playing it. I liked the weapons, but I kept forgetting my moves. I liked the cinematics, but killing 100 guys before getting to each one got sort of old.

Overall? I think this is about a 5/10 for me. I must stress that if you enjoy the series, or enjoy very challenging games in general...you might like this. It's certainly not an "arcade" type game though, and I think that's my ideal when it comes to these. Give me Dynasty Warriors or Ninety Nine Nights over this one any day.

Achievements? I did play quite a bit. 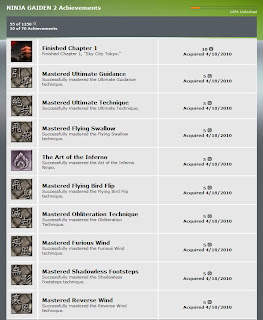