Video game number one hundred and six: Disney Sing It

Video game review number one hundred and six in my 365 Games in 365 Days project is"Disney Sing It".

This game is basically karaoke revolution for people who enjoy the kind of music made famous by various Disney Channel stars. I am not a fan, but luckily for me...my wife likes it. She has the High School Musical soundtracks and even went to the live musical when it came to town. She's already good at Rock Band, so I figured she'd like this one.

I saw that there were a couple of achievements worth as much as 100 gamerscore that you can get for simply doing well in one song...and suddenly, I had a plan. My plan was that I'd bring this title home, I'd sing a few of these terrible songs with my wife. I figured she'd enjoy the game, probably bring the scores up, and I'd get a bunch of free gamerscore in a few minutes.

My plan was foiled by the fact that this game does not support Lips microphones OR the communicator.That means if you want to play two players in this one, you must have two separate USB mics (which I do not). Instead of singing the duets, I realized that if I was going to review this piece of shit, I was going to have to play it myself. I sang two songs, both by "Aly and AJ", and got myself a cool 120 points. After that...I handed the mic to Heather, and she doubled my gamerscore for me.

Since she played it more than I did, I thought I'd ask her for her review: Here's what she said: "I could see how kids could like this game. Little girls".

She sang through all of the High School Musical songs for me...and on the last one she said:

"Only one more to go, and then you can have your stinkin achievement"

When she finished, she said "No More", but then she started flipping through the song list and found something else she wanted to sing. I think that qualifies as a positive review as far as my wife is concerned.

Overall Score: For me: 2/10. Although I liked the gamerscore, this is probably the worst setlist I've ever seen in a music game in my life. I think I'd actually have more fun playing the "Rock Band Country Track Pack" than I had with this. In fact, I may just have to review it and see.

For my wife, my niece and anyone else who enjoys this new school Disney music, I think the score would be more like a 5 or even a 6. It's Karaoke, there are plenty of modes, and all the songs have live music video behind them, instead of pre-rendered animation.

Achievements? I got a couple on my own, and then Heather earned me almost 200 more in this one. If we'd had another microphone, we could have easily earned another 200 playing together. This game is a gamerscore generator for sure. 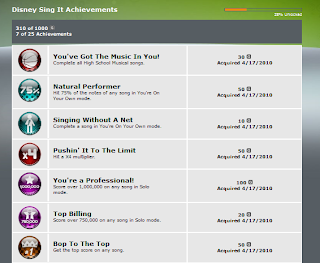