This game is Guitar Hero.

It's not even a "new" guitar hero, it's just the same songs you've already played in previous versions, but now you can sing along with and drum on them if that tickles your fancy. Unfortunately, my fancy remains un-tickled.

In previous reviews, I've made my opinions clear about Guitar Hero as far as the comparison to Rock Band goes. Those opinions have not changed. In Smash Hits, the ONLY thing they're really adding is the ability to play your "favorite" songs with all the instruments. Frankly, if I want to do that...I'll probably play Rock Band.

Overall Score? 5/10. If you LOVE Guitar Hero, and you were dying to play these songs as a band with your friends, this game is a nine or a ten. If you're like me...and have no interest in playing Guitar Hero as a band, there is nothing new for you in this game.

Achievements? I got a few. 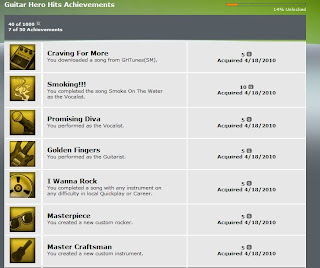