Video game review number one hundred in my 365 Games in 365 Days project is "Mario vs. Donkey Kong 2: March of the Minis".

Game number lucky 100 was a pretty good one. I had a pretty big choice of games to pick while waiting in line to see "An Evening with Kevin Smith" in Portland. I was sitting on the sidewalk, scrunched up against a brick wall (a perfect place to have a DS)...and decided to play this little game, which I had never heard of, but instantly got into.

March of the Minis is a game that reminds me a lot of lemmings, except the lemmings are all Marios. You guide your little Mario around a level by scratching at him with the stylus. You can steer him, jump him and get him to pick up weapons, but...ultimately...he's always going to walk in a straight line if you don't. That means he'll walk right into pits of spikes, or enemies that can kill him in one shot.

In order to stop this massacre and get your peeps home, you must build bridges for your Marios, or run elevator switches for them. You can grab hammers and hit the little enemies that are in your way. Frequently, you'll be asked to multitask and help several Marios along at the same time.

I played until the sun started to set, washing out my DS screen. After that, I put the DS in the trunk of the car and didn't pick it up until about midnight on the drive home. At that point, tired as I was...I still made it through the first 10 levels, progressing to the boss of the first world and moving on to the second world. Around then, I decided it was time to try a new game.

Overall score is 8/10. I like this one as much of most of the DS games I already own and I'd totally buy it next time I was going on a road trip. 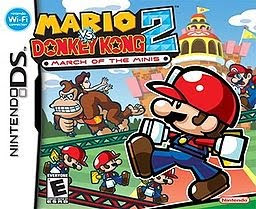