Midway has packed these games up a dozen times on a dozen platforms, but this PSP version is the latest offering for the mobile crowd. This little UMD disk has the following games on it:

I'm a big fan of a some of these games, and others....I don't really care about. I'm really disappointed that some of the greatest hits from previous Midway collections weren't included, like Root Beer Tapper, Robotron, Gauntlet, Roadblasters and Super Sprint.

Still, I was in a car when I began playing this one, and there's nothing better than a quick little arcade game on a long car trip. I played Joust first, and noticed that the graphics looked a bit distorted on the PSP screen. I assumed this was because the aspect ratio was stretched to HD, but seriously...how fucking hard is it to make a game like JOUST look right? Can't be that hard.

Even though it was pretty ugly, I enjoyed Joust. The controls were still good and I played a few games of it before moving on to Paperboy. I found this one much harder to control than it was in previous console versions. The bike was VERY difficult to steer, which doesn't make a ton of sense, considering this has been ported many times before.

Mini-tangent: My PSP is my least favorite gaming console that I own, and most of that is because of the bad controls. Playing games on this thing is a chore. It's nice to look at it, but it's awkward to hold. I've always felt that the system needs a second thumbstick if it's ever going to feel like a Playstation. Sony put one stick on there already, I will never understand why they couldn't spring for the second. Games like Katamari Damacy are SCREAMING for it. Games like Paperboy don't need it, but they could benefit from a thumbstick that's slightly bigger than a laptop mouse nub.

Frustrated of crashing in Paperboy, the next game I played with was Klax, which I really enjoyed. Klax is a puzzle game which I first played on my Atari Lynx back in my sophomore year of high school. I was a big fan of the Lynx back then, and to this day, I can't remember ever playing a better surfing game than California Games on the Lynx. It rocked. Klax on the PSP was just like Klax on the Lynx, and I played it until I finally died around the third level.

Next, I played some Spy Hunter. The PSP controls made this the worst version of the game I've ever played. I played through the first level before becoming frustrated and turning the game off altogether. Like Paperboy, Spy Hunter is not fun at all on the PSP, and I again found myself wondering how it's possible to ruin a 30 year old game. I mean, have the people who ported these games ever played the old ones? Do they know how they're supposed to feel? Couldn't they tell this port sucked before they shipped it?

When I finally got to Portland, one of the things we did was hit up the Ground Kontrol bar and arcade. This place is like paradise for someone like me. It's an arcade filled with all the classic games from the 80's (including all of the ones that I had JUST been playing only hours before on my PSP) along with a whole floor of great pinball games. I went through a ton of quarters playing the real stand-ups, and by the time I whipped this PSP game out again, everything felt lame by comparison. I played Rampage and Defender before putting it back into its case and moving on to something else.

Overall score? 5/10. Average and nothing more. There have been ports of these same games in the past where the game is actually improved in some way on the new system. Joust on Xbox Live arcade offer online chat and multiplayer. THIS was cool. The first time they appeared on the PC with leaderboards so you could challenge your friends to high score contests...this was cool. This PSP port just feels like more shovelware with absolutely no effort put into it at all.

Trophies? Not supported, but I got a few high scores on my PSP. Yay. 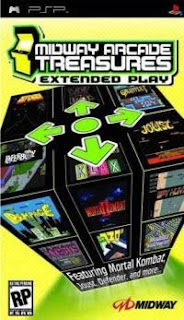