Video game review number one hundred and one in my 365 Games in 365 Days project is "Mystery Case files: MillionHeir".

I'm pretty sure that if I didn't include a picture of the box art along with this review, people would probably think that I made this game up just to pad my numbers for the project. I assure you, I did not. I asked my buddy John to bring over every DS game he had that I might not have, and he figured I wouldn't have this one. He was right.

Mystery Case Files is one of those hidden items game where you run a magnifying class around your screen until you find one of the many things you are supposed to looking for. A pair of boots. A mouse. A diamond. A clock. A birdhouse. You get the idea.

There is a game like this for Xbox Live Arcade called "Interpol". They tried to weave a plot into it about how you're this agent searching for things, but honestly...who cares about the plot in a game like this? It's basically a game you've probably played before (maybe it was called "Where's Waldo"), and you don't need a plot to know you have to look for things.

I played through two levels of this before figuring I had done enough "research" to get the basic gist of it. If you like hide and seek games, this is a good one. If you prefer your hide and seek games to star celebrities, I suggest sticking with your buddy Waldo.

Overall score? 5/10. Average. Exactly what you're expecting if you want to play a game like this. I'd score it higher, but frankly...I think games like this need to be on bigger screens (like your computer). Playing it on a portable system just makes it harder to find the smaller items...especially if you're like me, and you want to pretend you don't need glasses for games like this. :-) 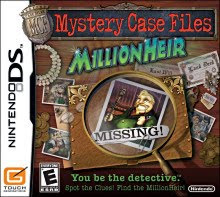