Video game review number one hundred and five in my 365 Games in 365 Days project is"Prison Break: The Conspiracy".

Remember the first season of the Prison Break TV show? You know, the only one that was any good...when they were actually in prison, and their job was to break out? This game takes place in that season. If you were a fan of the show (like I was), you might think "cool". I'll have to advise that you turn off your imagination right now.

The Prison Break video game does indeed cover the events of the first season, only you aren't playing any of the characters from the show. You're not the guy breaking out of prison, or his brother, or any of the inmates he takes along with him. No, your character is simply a spy from "the Company" (the evil organization from the TV show)...and you basically watch what's happening from afar.

Is Michael Scofield up to something? You'd better go spy on him. How about his brother? You better climb through the walls to get a better look. The infamous Theodore Bagwell (or "T-bag" for fans of the show) is about to start a fight. Run over there and break it up.

This game reminds me of all those tv shows or movies where the main character is asked to go back in time and make sure not to mess with history. That's your job in this game. Nothing you do has any impact whatsoever, and the manner in which you do it....is boring.

When you aren't sneaking around trying to see what the main characters from the show are up to, as an inmate, you will do things like lift weights, hit a punching bag, get in prison fights. All of these things are just about as fun as they sound. The developers of this one got most of the real stars of the show to do their character's voices...but you won't be able to hang around those characters, because you'll be too busy stealthing your way into the kitchen trying to grab a knife for Joe Abruzzi (presumably before he dies later like he did on the TV show). Oh yeah. SPOILER!

Overall score: 5/10 I liked the first season of the show, which led me to believe I might like this game. I did not. As an action game, it's boring. As a TV show adaptation, it keeps you too far away from everything that made the TV show good. As a stealth game? Look, I just got done reviewing Splinter Cell...and that's what a Stealth game is supposed to be. This one is just...silly.

Achievements? Yeah...there are plenty. As you can see, I played this one quite a bit before giving up on it: 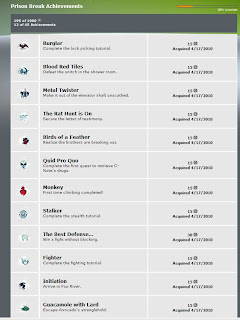