Video game review number ninety seven in my 365 Games in 365 Days project is "The Outfit".

I woke up a little early this morning and decided to get to work on a new game. Well, not a new one (this was released in 2006) but was a new one for me. The game starts out with a cinematic of a Nazi getting a knife to the forehead, followed by a bunch of paratroopers taking out their camp. Definitely woke me right up. The following cinematics are kind of cool, and it seems like they have some fairly decent voice actors in this one, including Robert Patrick (whose character wears the Terminator glasses, which I thought was awesome).

This game is a third person shooter/strategy title...and reminds me just a bit of a game I reviewed awhile back, Toy Soldiers. I think Toy Soldiers may have borrowed their concept heavily from this one, because I see a lot of elements of The Outfit in the way they do things. You can fight on the ground, but it'll be easier to win if you use your money to buy the right units.

That's right, there's an economy in this game. You earn money by killing Nazis (you should imagine me speaking the rest of this review in the Brad Pitt voice from "Inglorious Basterds" by the way). Every Nazi you kill earns you some sweet, sweet money....which you can spend on more killing machines. Tanks, machine guns, Anti-tank canons, even air strikes can be purchased if you do enough killin.

There's an entire online mode in this one that I'll never get to play, because it's from 2006 and people have long since moved on to other games. That's a shame, because the campaign is pretty fun so far.

The achievements are REALLY tough to get, because they're all objective based. I'm not generally a fan of games that do this. I think that you need to have your achievements spread out evenly. Some should be earned by simply completing your basic campaign, some should be for doing crazy objectives...and then if there are any left over, use them for online. This game splits it's achievements right down the middle, you earn about 50% of them playing through the campaign...and you'll get the other 50% online (which means I can never earn that half). This sucks, but as I've said several times before, this challenge isn't about gamerscore, it's about new games.

Scoring this game is going to be tough. First of all, if this was a 50 dollar game, I would have to give it a much lower rating than I'm about to. I'm actually having quite a bit of fun with it, but at the same time..it has flaws. First of all, it's a four year old game, so the graphics don't stack up against the newer games (including Battlefield Bad Company, which I just started playing yesterday). The offline achievements are annoying, and VERY easy to miss. I had to go back and play the first two levels over again just to get three that I missed the first time around. Not cool.

The save system in this game is also horribly borked. Let's say you know there's an achievement objective coming up and you want to save before it. You can do that, but when you load that save, your character spawns at the very beginning of the level by deafult. You have to walk (or drive) past all the areas you've already conquered, all the way back to where you were before the action resumes again. This bugged me a lot.Last, but not least...I will also never be able to use the online mode. I will admit this is my own fault for trying this game so long after it shipped....but that has to take my score down a bit.

To me, that sounds like a possible five out of ten, right? Not quite. Because this game is four years old, it's also VERY cheap to acquire. Ebgames has it brand new for 6.99, and at that price, it occurred to me that I should compare it to all the recent arcade games I've purchased...including Toy Soldiers. I gave that one an 8/10 and this one is a lot more fun to play offline than that is. However...since online play is not possible, this one is going to end up with a solid seven.

Overall score: 7/10. If only I would have played this one sooner than I finally did, I could have tried out the multiplayer. The campaign is great though, and the strategy elements are cool. Picking this up for 6 or 7 bucks should net you a lot more playtime than most arcade games out there for the same price.

Achievements? Here are the ones I have so far this morning. 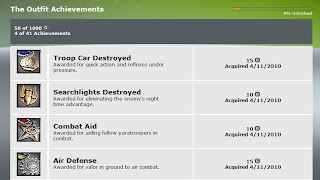