I have to be honest. I played this one for the achievements.

Yes, I have this whole "365 games in 365 days" thing going, but there's nothing wrong with picking up a quick 1000 gamerscore along the way if it's not going to take much effort. It's like...if you're headed to your friend's house to hang out, and they call you on your cell phone and say "Hey, while you're out...could you pick up a pizza? I'll pay for it." You were already on a trip, and someone's offering to add free pizza to the adventure, if you can spare a few extra minutes of your time. How can you turn that down? The 1000 gamerscore in this game was like a large pepperoni from Giordanos in Chicago, staring me right in my eyeball. All I had to do to get it was take a game I was going to play anyway and game the system a bit. All in all, it took me an extra 15 minutes over the 30 or so I had planned in investing in this one. To me, that was an acceptable way to spend an extra 15 minutes.

This game was made for children...or adults with the mentality of children...OR adults with silly, childlike obsessions about things like gamerscore. It will probably please all three demographics. It's a football game, with real NFL players....but for some reason, they're all little munchkins. It seems like the kind of game that should be on the Wii. There's nothing wrong with games like this, if you're a little kid. As an adult, you just feel sort of silly playing them.

I actually thought the game was sort of fun, the plays are simple enough to pick, it's easy to control your players....and the announcers are kind of funny. The achievements I was going for were easy enough that I didn't have to deviate from normal gameplay too much. Still, if I want to play a football game, I'll probably stick with the Madden series. In fact, I should probably add the newest Madden to my list of games to play (because I haven't tried it yet).

I'm going to have a tough time scoring this one...because I didn't take it seriously at all. This game is a joke. If you want some gamerscore, rent this one and get it. It'll take you less than 30 minutes to get all of it, and that's if you're playing against the stupid AI. Plug in a second controller, and you could potentially get it all in about 10 minutes.

If you have a child...I think this might be a fun game for them. You might even enjoying playing with them. But unless you ARE a child, or buying games for one...you should probably steer clear. This is football for babies.

Overall Score? 5/10. Average. It's not bad, but it's not good either. If you're not going to get it for the points or get it for the kids...then you should skip it. 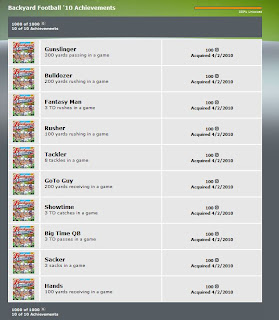 P.S. The Rusher achievement was the only one I thought was kind of hard. I actually said "fuck" once or twice when my pint sized Peyton Manning was sacked by some 3rd rate Seahawks linebacker.
Posted by JoshEEE at 8:21 PM