I've been interested in this game since last year's PAX. The developers had their booth right next to the guys from Twisted Pixel, and so we visited it quite a bit. They had a demo running and my nephew was totally hooked on it. Throughout the 3-day convention, he kept wanting to go back to this one booth over and over again and play this game. I really enjoyed it as well. That was eight months ago, and they've managed to build on the experience quite a bit since then.

Scrap Metal is a top down racer that reminds me a lot of three different games. I'll be able to tell how old you are if you remember every game on this list. The first game is Super Off Road from the arcades. It has an overhead camera, lots of sharp corners, and an arcade feel take me back to that quarter-muncher. I'm actually really interested in playing this with one of the steering wheel peripherals to see how it handles compared to that game. The second game this one really reminds me of is R.C. Pro-Am for the NES, mostly because you can switch the control scheme to mimic one you might find on a remote control car. Finally, there are elements of Twisted Metal in this one, in that all the cars have weapons. It's much better than Twisted Metal though, in my opinion.

There are several tracks, and each track has several stages. You might find yourself in a race, or an elimination match where you try to be the last car standing. There are demolition derbies (where you try to destroy as many computer controlled cars as possible) and on each track, there are boss levels. The "boss" cars are bad-ass vehicles that you'll eventually get to own if you can beat them. Your garage is stocked with all the cars you've won. You can upgrade them with all the points you get from winning races.

Last, but not least...the game has a mutliplayer mode which allows you to race against other people as well as computer controlled players. I found the competition online pretty fierce, but I enjoyed gaming with them just the same. It takes me back to the old school days, before racing games were all about how fast the frame rate was, or how realistic they could get the cars. Not saying the graphics in this game aren't good (because they are), but this game focuses more on fun than realism. It's truly an arcade game.

Overall score: 9/10. Arcade games don't get much better than this. In fact, I can only think of a handful that are, and they are named: Geometry Wars, Peggle and Worms. :-) 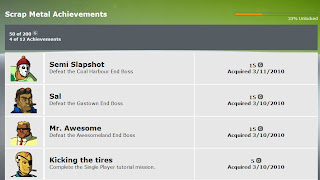