Call of Duty is pretty much the only "modern" or "historical" warfare game that I really enjoy. Everything else in the genre that I've put any considerable amount of time into takes place in the future. Halo, Gears of War, Crackdown, etc, etc. When I play shooters, I like them filled with futuristic weapons, cars and planes. Somehow, the games that tend to simulate the wars of today (or yesterday) just haven't been my cup of tea. I don't know why, maybe it's because I like a certain form of escapism in my video games...but I've pretty much skipped them all until recently.

All the guys at work really enjoy the Call of Duty series. My nephew jumped on the bandwagon with Modern Warfare 1, and I told everyone I knew that when the sequel came out, I'd play it. Turns out, I really love Call of Duty Modern Warfare 2. Apparently, so do the makers of this game, because they have done their best to duplicate it as closely as possible, without actually getting a job at Infinity Ward and working on the next sequel. When I played this, I felt almost like I was playing some "bonus" levels of Call of Duty. It's a good game on it's own, I suppose...but it's really derivative, and it lacks the polish of Call of Duty. That game felt epic. This one...not so much.

None of this should be taken to imply that I'm not having fun with the game. The first level starts out sometime around the Pearl Harbor attacks. At first, I thought it was actually an old school war game...which made me wonder if I had my facts wrong. Turns out, you're just playing a prologue, and soon...you're back in the present with all the automatic weaponry you could ever need.

I zipped through the first 3 or 4 missions, where I sailed down a river, drove some cars, called in an air strike on a tank and did some other stuff that might be considered "spoilers" to anyone looking forward to playing this game. I will spare you the details, other to say that if you liked Call of Duty..you'll probably like this game too.

Overall score, 8/10. I came up with this score based on the single player experience alone. I haven't tried to the game online yet, but when I do...I may add to the score based on how fun that is. I won't subtract from it for a bad online experience...because frankly, I didn't pick it up to play online. I have Call of Duty for that. I bought it for a good campaign, and so far...it's delivering just fine. 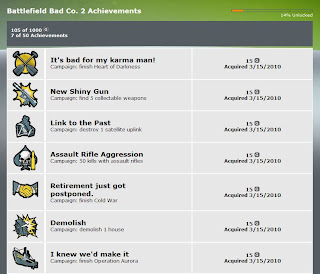 Well, I have spent some more time with this game. First, I played the multiplayer, which I have to say...I did not like. There were some awesome elements (vehicles, class switching on the fly like Call of Duty, rewards for teamwork, etc)...but overall, I didn't like the way you spent most of the level running and respawning. Unlike Halo and Call of Duty, this game seems like it's not about the fast shoot-em-up style, and is instead...all about the sitting and waiting. I'm not a fan of that. Never have been, never will be. Snipers are the class to pick in this one, and frankly...I hate being a sniper. I played several rounds, but didn't level up enough to get any good achievements. Within an hour, I was back on Call of Duty, working towards my first prestige. I'm at level 70 as of this writing, with about 40,000 more EXP to go before I do it. :-)

I did finish the Battlefield Campaign today, and I have to say...not only is it a fun game, it's a good story. I want to go back and play the first one now, even though I played them out of order....just to see where all these characters came from. I really liked the story, it's a fun campaign and they clearly set it up for another sequel too.

I've been working on it for about a week now, and unlocked about 19 more achievements. I'm actually not done either, I want to go back and grab a couple of other ones before I call this game finished:

My overall rating continues to be an 8. The bad multiplayer isn't going to knock it down for me, because frankly, I never planned on playing it much anyway. The campaign is great, and might even rival Call of Duty as far as fun goes. 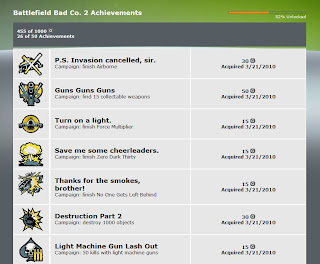