Much like my review of Hasbro Family Game Night, I can sum this game up simply by saying that the board game is more fun. In my life, I have played countless games of Monopoly, long before the game's resurgence of popularity, when every country, state and city had it's own version of the game. I love Monopoly.

There have been many Monopoly video games over the years, but this is the first one I've actually played. Frankly, I never saw the point. Right now..the point is to get through 365 games in 365 days, so I picked this one to try. I played an entire game against three computer opponents (who promptly bankrupted me), and I have to say...it's a terrible game. First of all, if you're going to play this video game, it's presumably because you like video games. You spent more buying Monopoly the video game than you would have spent buying Monopoly the board game. So it should play like a video game, right? Wrong.

The things you'd expect in the video game version simply aren't there. Play against 3 computer opponents, but you can't skip their turns. You have to watch as they slowly roll the dice, count their spots, land on properties...which they can buy or pay rent on. It's just like playing the board game against a computer might be.

Were you hoping for silly animations when you land on spots like the Boardwalk or maybe the railroads? Well...tough shit. They aren't here. The developers of this one simply took a Monopoly board, replicated it perfectly...and the only thing they animated are the pieces. By animated, I don't mean that the dog barks, or the car drives (that would be kind of cool, wouldn't it?). No...I mean that the pieces hop from spot to spot like the little silver game pieces at home. This game offers absolutely no extra entertainment value over the cardboard set you have at home...it simply offers a way to play that same game with a controller and computerized opponents, instead of manually with a few friends. Think of it as Solitaire for your PC, without the fancy animations when you finally win a game.

Realizing the base version of this game sucks balls, I played their new "Richest" mode. The "Richest" mode in this game seems to have been created for stupid people with A.D.D who think that the concept of regular Monopoly is too challenging. They take away all those annoying things like "money", "strategy" and property trading...and turn it into a game of dice rolling and mini-games. The stupid mini-games involve things like "Race your car from point a to point B" (a really, really bad version of Spy Hunter on the NES without the fun weapons). If you win this boring race, you're given a choice of pre-rolled dice to pick from. Choose the six, and you'll snatch up six random properties. Later, you'll lose those randomly based on other rolls of the dice you have no control over. Sounds awesome, right?

There are 6 rounds in each game of Richest. I made it through all six...and that was the end of this game for me.

Overall score? 2/10. The only good thing about this game is it makes you nostalgic for real Monopoly. If you've never played it before, be sure you go out and spend 15 bucks on the home board game before spending 30 on this shitty video game adaptation.

Achievements? They're not hard to get. Had I wanted to get all 1000, all I would have had to do is load up three empty controllers and grind. These points aren't worth it, trust me. 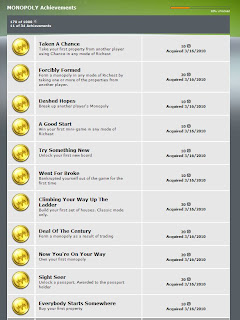