This one is the second in my Sunday of games based on crappy movies. Surprisingly enough, this one is also not a terrible game.

Superman Returns was not a good movie. It started out great, and then takes a turn so far into the absurd that you basically hate every character in the movie, including Superman himself. It's a shame, because the guy they got to play Superman nailed the role...and I don't think he's going to get another chance to redeem himself when they inevitably "reboot" it.

I sort of assumed I was going to hate this game, so maybe that's why I didn't. First of all, you don't start out following the plot of the movie, which is a great thing. You begin the game by learning to use your powers while fighting a bunch of asteroids headed for Metropolis. This is cool. Next, you fight in some tournament on your way to Krypton. This is also cool. It's not following the plot of the movie, although the movie did mention that Superman was on a trip back to Krypton and left the world alone for awhile. These two opening levels aren't part of the story you know, but they are a pretty cool way to learn the basics of the game.

When you get back to earth, you settle into your role as Superman. I have to say, being Superman is boring. The first thing I noticed is that everything you fought could kill you. I heard there were some cheats to stop this from happening, so I found and entered them. You get a zero point achievement called "Not So Super" for doing that. This achievement is bullshit.

Superman is supposed to be SUPER. He's not supposed to die and get his ass kicked all the time (although you wouldn't know it from watching the movie this game is named after). By entering the cheat codes, I turned him into the Superhero he's supposed to be, and the game became more fun as a result. At least for awhile.

After the novelty of being Superman wears off, you're left waiting around Metropolis for someone to call for help. You save them. Then you wait. Then you save someone else. Then you wait. This is exactly what being Superman must be like. Every once in awhile, the plot progresses...but mostly...you're just waiting around to save people from robots, fires...or other problems they're having. Apparently, there are even cats you can save...though I never looked for them.

After awhile, I decided to be more like General Zod. I started taking people's cars and throwing them. I stood in the middle of the street and used my super breath to blow a bunch of traffic down the road towards a building. I used my heat vision to ignite some gas tanks, and flew at sonic speeds right into the sides of skyscrapers. All of this was fun, at least for awhile. Eventually, it was back to fighting robots.

Finally, roughly 3 hours in, I got to fight Metallo. You fight him 4 or 5 times before you get to fight the "real" Metallo, and this was a cool battle. He's HUGE, and you throw cars at him to slow him down. He's wrecking the city while you try to stop him by throwing lots of junk at him...it's pretty good. I'm not sure I want to keep playing to see what happens next, but I might eventually. It's not a terrible game...and although it might not be saying much, I think it's a lot better than the movie was.

Overall, I'll give this one a 6/10. I liked it enough to call it above average...probably even enough to go back and finish sometime if I'm bored. On the other hand, perhaps I should stop playing now. The first part of the game was decent, but if it's anything like the movie...Superman is going to turn into a whiny little bitch, start stalking Lois Lane outside her window, get the shit kicked out of him by Lex Luthor...and will eventually need some little super bastard to save him. I don't want to play that game. Ever.

Achievements: Here they are: 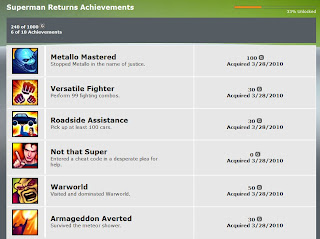