Video game review number eighty three in my 365 Games in 365 Days project is "Just Cause 2".

I never played the original Just Cause, so this was my first time playing this series. Unlike Bad Company 2, I have no desire to go back and play the original. The hero in this game is named Rico and known as "Scorpio" by the locals. He's supposed to be a bad-ass, but to me, he sounds like Triumph the insult comic dog. Speaking of Triumph, this is a great game....for me to poop on.

The trailers made this one look great. You have a grappling hook, you can drive cars, parachute, even eventually fly some planes. It's a sandbox game, so apparently, you can do all of this in any order you choose. It sounds fun on paper and it looks good in the previews...but unfortunately, that's all hype.

Your main character is annoying as hell to control. The grappling hook is really cool, but unfortunately, it's more of a secondary weapon. Your primary weapons are all guns, which are always out of ammo, and hard to target people with. I eventually learned to tolerate the bad targeting, but it took nearly 3 hours of practice.

The parachute is fun, albeit unnecessary at times. You can deploy it while standing on top of a car and fly away. That was cool. On the other hand, when falling off of a building, when a parachute might be handy to have, for some reason...it's much harder to deploy. I died twice while trying that.

There is a plot in this game, but in one of the dumbest moves I've ever seen...you have to grind to be able to participate in it. You have this thing called a "Chaos meter" and it's basically a measure of how many bad guys you've killed. For two levels, I didn't even notice this meter, because I was busy making my way through the story. Suddenly, they throw you in this open world map and say "Before you can play mission 3, you need so many thousand Chaos points". I started killing things and finding that I was only getting 50 or 100 points at a time.

Fuck all that noise.

I'm done with this one. There is absolutely nothing about the story I have experienced so far that makes it compelling enough for me to want to grind through enemies just to see more of it. Imagine if Grand Theft Auto made you kill 1000 hookers before you could go on the next mission with Niko and his cousin Roman. That's what this game is like, except the characters are nowhere near as compelling as the ones in GTA.

Overall score: 5/10. It's sort of fun, but it's certainly nothing worth investing your 50 bucks in. Rent this one first for sure.

Achievements? There are actually some cool ones that I had fun trying for (all involving the grappling hook). Most of them are related to game progress though, and I'm not interested in grinding to see what happens next. 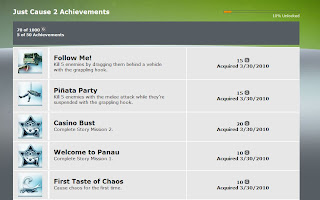