Video game review number eighty one in my 365 Games in 365 Days project is "GI JOE: Rise of Cobra".

I thought I'd play a couple of games based on crappy movies today. This is the first of them. Movie tie-in games are not generally very good, and when it's a tie-in game based around a movie I didn't particularly love, I generally have almost zero desire to play it. For some reason, I decided to play this one instead.

Maybe it's because I was coming off of Metro 2033, or maybe it's because I just like the genre, but I thought this game was kind of fun. Rise of Cobra is a 3rd person shooter, there are many familiar characters (from both the movie and the cartoon from when I was a kid) and they all have different specialties. I liked the "heavy" class, because they do the most damage.

You breeze through the levels, mowing down anything in your path...and success is more based on score, than on progression...which is really easy at the default level. You can't get the best scores until you try out the hardcore modes...which I have no intention of doing. I figured I'd play on the default and see how much I could get through before I got bored.

About 2 hours in, I checked the achievements and there seemed to be an awful lot based around the two player co-op.

"Do you want to help me get some two player achievements?"

"Not really"she said. "How long will it take?"

"Just one level" I replied.

That was about it for the conversation. I kept playing for awhile, but...as she was walking to the kitchen, she heard the GI JOE theme song, which is triggered whenever you get your "invincibility".

"You didn't tell me you were playing GI JOE!" she said.

Suddenly, she was interested. I told her she could be Scarlett, in the classic cartoon outfit and she liked that idea By this point in the afternoon, we were about to head out for a movie, so I made a mental bookmark to ask her again the next day.

Monday, after we got home, we decided to play through a level together. This made the game quite a bit more fun. I'm not sure if it was because the game is meant to be a two player game, or because I automatically like most games more when Heather is interested in playing them too.

It took her a minute or two to figure out the controls. Shortly thereafter, she announced that she could do back flips. The first level we went through had a jeep with a turret on it. Heather got to control the turret and she outscored me somewhere in the neighborhood of 60% to my 40%.
"It's because I had missles" she said.

We made it through the rest of that level and unlocked several achievements. As we were going on to the next one...I asked if she wanted to try being the "movie" Scarlett. She said:

We kept playing for a total of 6 checkpoints (2 full levels) before it was time to head to bed. When all was said and done, we had racked up 4 of the 5 co-0p achievements, which gave me a grand total of 17.

Overall, I'm going to rate this game a solid 7. Any game that's interesting enough to get Heather to play along for more than a few minutes automatically gets some bonus points. Ultimately, it's probably just your basic game...but I had fun with it, and that's what I'm basing my score on. I might even finish this one eventually. Now you know, and knowing is half the battle. 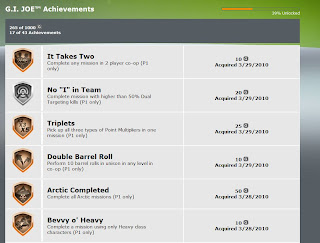