For the last 106 days straight, I've been on an impressive gaming streak. Actually, I suppose the term "impressive" may not apply, as I'm pretty sure I'm the only person who was really aware of this streak. So, I will rephrase and say that for the last 106 days, I've managed to do something to impress myself.

Getting an achievement once a day was pretty difficult, and I'm actually not sure how I managed to last as long as I did. Sure, there are some easy achievements out there, but most of them require playing your game for at least a little while before you complete whatever goal it is you're trying to complete. That meant that whether I was at home, at work, or even traveling...I had to find some time to play a game for long enough to get some gamerscore. For the last three months and fourteen days, that's exactly what I did.

There were some days where it was easy (weekends at home for example), and some days where it was really hard. I don't really remember how I managed to rack up that many days in a row...but I do remember where I was and what I was doing when I killed the streak. This Monday night, I was in New York City traveling for work. I'd been working all day long, and even though I brought an Xbox with me (and I always have Xbox games on my phone now), I just didn't feel like chasing an achievement. I ended up playing some Call of Duty, and before I knew it, it was midnight...and my opportunity to keep the streak going was over.

So I lost my gamerscore streak because I was having fun gaming. I'm ok with that. I still have my "consecutive days of gaming" streak, and that's at 161 days....and counting. 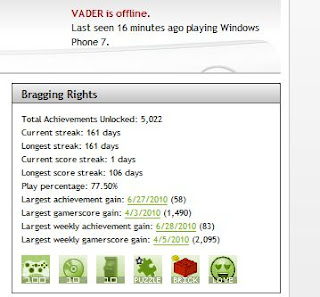