As far as I'm concerned, Daniel Craig is not James Bond. I don't care that the two movies he made were pretty damn cool movies, I will continue to assert that they weren't good "James Bond movies". They were fantastic imitations of the Bourne Identity films (itself a modern spy movie update), but the new Bond has absolutely none of the charm of the classics.

James Bond has several awesome qualities that the movies have always been loyal to, and I'm going to break them down for you:

Daniel Craig's Bond doesn't have any of this shit. He shops off the rack as far as his walkie-talkies and crap are concerned. The most futuristic gadgets he carries around can all be purchased from the Sharper Image catalog. And his car? Paris Hilton probably has one just like it. There's nothing unique about it, it's straight off the factory assembly line. No missiles. No ejector seat. He can't even drive it with a remote control.

2. He's not just a ladies man, he's THE ladies man. James Bond is the ultimate pimp, spouting off cheesy one-liners, pick-up lines and sexist comments that would get every other man alive a good smack in the pie-hole. It works for Bond, and that's why it's fun for guys to watch. Daniel Craig's Bond has a few good lines, but his mannerisms when it come to the fairer sex seem to have been toned down a lot. He's the updated, "P.C" version of James Bond...and it shows.

3. James Bond is always in control: No matter what's going on around him, Bond always has a plan. Not the Daniel Craig version. In just two movies, he's already gotten his ass handed to him multiple times by the bad guys. He's been poisoned, he's had his nuts bashed in, and he's been beaten up in fist fights more time than I can count. Sure, he has some moments and he eventually prevails in the end (spoilers), but much like the new Superman...he doesn't win until the bad guys have punked him more than a few times. Apparently, this is so we can see his softer side or something. I have news for the people who made both of those movies: James Bond and Superman don't HAVE softer sides. They should always win, with no exceptions. :-)

I always liked the old school Bond movies as a kid, and when I heard they were bringing him back again with a new movie, I was a little worried. As a teenager, I saw GoldenEye, and I was surprised when it was pretty damn bad-assed. I thought Brosnan was a good Bond, and the movie was a really decent movie. They went downhill from there, but at least they felt like Bond movies, instead of Jason Bourne movies.

The video game that followed the release of GoldenEye was one of the best games ever on the N64. From the single player to the multiplayer, it was the first shooter I ever played and enjoyed on a console. Multiplayer sessions of GoldenEye were legendary, and I must have beat that campaign at least 4 or 5 times over the years.

This Wii game is an updated version of the old one that I loved. Updated graphics, same levels...same basic plot. My buddy Andrew gave some high praise to this game. He was a big fan of the old one, and thought that this one was a faithful and decent remake. Him telling me that it was good definitely got me interested. On paper, it sounds awesome, except for one thing:

As much as it bugs me, I decided that I could get over the Daniel Craig stuff. Honestly, the first cut scene was actually kind of cool, and because it's a first person shooter, you don't have to be constantly reminded that you are in fact, the douchebag Bond. You can pretend you're one of the older, cooler ones.

Unfortunately, I quickly learned there was another fatal flaw in this game:

That's right. Pardon my French, but once again, another potentially high quality game has been completely fucked up it's own ass by the bullshit Wii controls. You have to hold the nunchuk in one hand and aim your gun with the Wiimote with the other hand. I HATE this control scheme. There are six different varieties of it, and I tried 4 of them, just trying to make the game playable. I failed. My aim was awkward and all over the place. I couldn't snipe to save my life, and targeting multiple enemies was a joke. It was so slow that some of them walked right up and punched me to death while I was trying to scope them out.

Luckily, the developers counted on us old-schoolers showing up, and they have added the option for using the classic controller. There are several control schemes for that, and I tried three of those. If you're taking notes, I had now tried exactly 7 different control schemes, ,just trying to find one that doesn't make the game feel like dog shit. When's the last time you had to go through that much hassle just to play a video game you wanted to play?

FINALLY, I found a classic control scheme that I liked, and played through the first couple of levels with it. The game is very similar to the old one, from what I can remember. The graphics are definitely improved (but still nothing like you might find on the 360 or the PS3, where I wish this game would have been released). Good dialog. Classic story. The stealth that was pioneered by the original is still here, and still just as effective. Splinter Cell owes it's entire history to GoldenEye, as the levels where you have to sneak up on a bad guy and silently kill him have become the entire plot of a Sam Fisher game.

As far as the run and gun goes, even with the classic controller, the accuracy is still lacking compared to my memories of playing the game on the N64. I just didn't feel as deadly as I did back then. I think that's probably because they optimized for the stupid Wiimote, and I simply wasn't willing to struggle through playing it that way. Andrew told me that if you play it with the "other" classic controller (the one that feels more like Gamecube, that I don't happen to own), it's actually a better experience. I'll note that with an asterisk for future reference.

Overall Score? 4/10. Much like Kinect Joyride I think that the game itself could have been fantastic, but it's been ruined by a gimmicky control scheme. Unlike Kinect Joyride, there's nothing novel or new about playing a game with frustrating controls on the Wii....and so I can't say I really had much fun at all. If you're willing to suffer through the Fisher Price controls as the price of admission, this game could be good...even great, but I just couldn't get comfortable playing one of my favorite shooters of all time with this wonked out control scheme. Imagine trying to play Street Fighter 2 on a non-touch screen cell phone and you'll get what I'm saying.

2 hours in, I was ready to quit. I honestly have no desire to come back to this one. It's definitely nice that there's a remake out there in the world, I just wish it was for one of the "next gen" consoles instead.

Achievements? None. It's a Wii game. However....I felt compelled to document the amount of time I wasted playing this. Let this serve as a reminder to myself that I wasted two hours that I'll never get back: 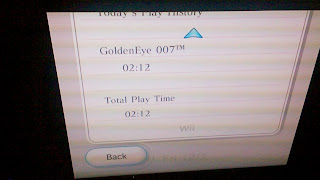