I spent a brief amount of time playing Splinter Cell on today, its launch day, and so far, I like what I'm seeing. Splinter Cell has always been very hit or miss for me, but mostly miss. I'm not a fan of stealth shooters. I like to "run and gun", and these games punish people like me by making your character incredibly weak when he does that. This particular game is no different, but at least the stealth is fun.

I haven't played it enough to give it a decent review, so I'll be back. In the meantime, here are the two achievements I have:

Alright, over the last couple of days I've given this game much more of a chance. My first impressions all remain, but I have to say...I'm enjoying it a lot more now that I've given it a little more time.

The graphics in this game are awesome, and even though you're sneaking around all the time, they keep it interesting by displaying your objectives on walls (projection style) and having the characters you're stalking spit out all sorts of funny dialog. Every time you're in an enemy area and you kill one guard, the rest of the guards start yelling at you, saying all sorts of crazy stuff. It's definitely caused me to laugh more than once or twice.

I haven't quite finished the campaign yet, but I'd say I'm about halfway through. Last night, I also played through some of the co-op with my friend Jason. Playing a stealth game together is a bit annoying at times. One of us (usually me) would Rambo ahead and be seen...causing the other to have to restart the entire level. However, the last level we played, sometime after midnight...had an epic finish. His character was being held as a human shield by one of the enemies. Meanwhile, another enemy had shot and downed me. We were both essentially helpless, and usually, this kind of situation means a level restart. Luckily, there is a "last stand" mode, so my character was able to sit up, shoot down Jason's captor, then I turned my pistol on three of the guards around him....giving him enough time to come over and revive my character who had less than 10 seconds until death. To top it all off, we both jumped onto a helicopter and escaped. It was a pretty rewarding finish.

Overall score? 8/10. I usually don't like this type of game, but this is easily the best stealth game I've ever played. Once I've completed the missions, I can't see playing this again, but it's still going to be a really solid single playthrough.

Here are all the tasty achievements I've gotten so far: 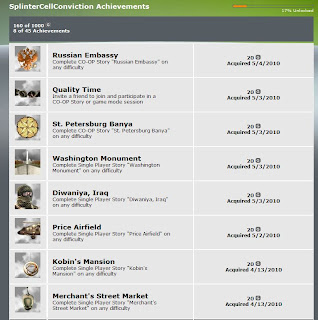