This is the first of two free Xbox Live Arcade games that were released yesterday as part of "Unlock Xbox" contest held by Doritos. Basically, people all over the world got to submit game concepts, a studio developed a couple of the best ideas and then released both games on the same day. Xbox Live users get to vote, and whoever came up with the best game wins 50,000 bucks. They're going to have people vote until December 29th, and the winner will receive the cash prize.

It's cool that this game is free, and I didn't hesitate to download and play it. I had actually read an article about this particular game on the internet before (I can't remember where or I'd link it) and I thought it was a decent enough concept for a game. Basically, it's a car racing game, except there are turrets all over the track. You can choose to be a racer or a shooter. The goal of the racers is to finish the race, the shooters are supposed to stop them. You can team up on Xbox Live (you drive while a buddy snipes at the other team). On paper, it definitely sounds like a good idea.

As far as the execution goes...it was only "Ok". The racing half of the game is fairly awful. The track boundaries are confusing (I went out of environment a couple of times by accident in my very first match). There are multiple racing lanes on a semi-open track, and it's tough to tell which one is the fastest unless you're paying very close attention to the map or you've memorized the track already.

As the driver, there's not a lot you can do to protect yourself from being shot, except picking up power-ups and hoping that you get one that can disable the turrets. Turrets can also shoot the power ups...so yeah...as a driver you're basically screwed. If it were more fun to drive, or you had more of a fighting chance it might be fun, but alas...it's just lame racing all across the board.

Being the turret is a lot more fun. You can snipe racers, use machine guns and/or missiles on them, and when you blow them up, they are completely stopped for a little bit. The aiming is fairly good, and if the car is getting out of range, you can swap to another turret further along the track. I really like this feature, it keeps the game extremely fast paced.

Overall Score? 4.5/10. The racing half is somewhere around a 2, but the shooter half is more of a 7, and that brings the score up for me. As a team concept, I really like this idea, although I wasn't able to find people on Live playing it when I tried this morning. That's really weird because it's free and it just came out, so maybe it was just the time of morning that I was trying. I'll give it a "shot" again tonight.

I should note that if this concept were better executed, this game would definitely be epic in my book. If the racing were like Need for Speed, but you could sit at the side of the track and snipe the race cars? Oh man...that's a game I would totally love to play. Someone needs to get their ass on developing the idea immediately.

Achievements: Look at all the free Cheevos I got in only 40 minutes or so of gameplay. 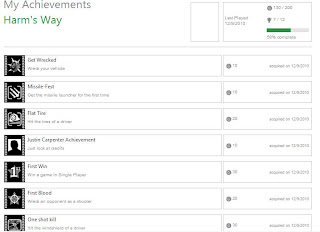