This is the second cell phone title I've reviewed so far this project. The first was Angry Birds, and that remains my favorite cell phone game of all time. I've put countless more hours into that one since writing the review, and I'm STILL not done with it yet. It's a full game experience, and something I really really love.

By contrast, there's nothing particularly special about this game. Word Feud is just Scrabble. If you've played Scrabble, you've played this, but if not...let me summarize it in a nut shell. Scrabble involves each player starting with 7 letters, and trying to spell words using only those letters, and those of the other player. You place your letters on a board, and each one has a score value. Some of the spaces can earn you double and triple points.

Even though I've played Scrabble a dozen different times from the board game to Facebook, I thought this one warranted a review for one simple reason: The multiplayer. It's great, and a ton of people I know are playing it.

You carry this game around on your cell phone (in my case, the Droid)...and you can play with your friends or random strangers. At any random time over the last week, I've had at least three different games going on with different people, and it's been rather addictive. My wife started playing it while we were on Thanksgiving break, and when my little sister saw us playing she said "That's one of my favorite games!" so we started playing too. My nephews wanted to try it...and before I knew it, I had 3 separate games going on, just with the people in the room. After playing a few matches, my sister and I gave our phones to the kids so they could practice against randoms on the internet.

We sat around on the couch (and the floor) after turkey dinner, playing words back and forth at each other. The next morning, I ventured out to shop at some of the Black Friday sales, and played while I was in line for those. When we went out to dinner later that night, I caught my sister playing a word , so I started to play as well. So much for no cell phones at dinner. The only game I've played more on my phone is Angry Birds, but even that doesn't have the multiplayer that this one does.

Overall Score? 8/10. Scrabble is a great game, and this game is Scrabble. With multiplayer. This is the first game in history that I've played online vs. my friends, my wife and my sister....meaning it has crossed every gaming demographic that I can think of. There's something awesome about that. I'm sure at some point, the fad will lose its luster and everyone will stop playing it every day...but right now, it's something I'm checking into every few hours. That's awesome. Just see below (names edited to protect the other addicted folks). 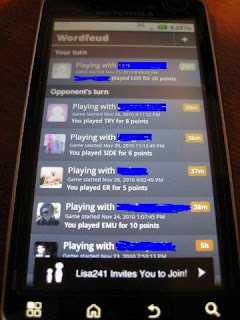 The legalization came after a failed attempt in 2020, when Mills shocked lawmakers with a 먹튀검증 veto over considerations about betting on elections and spelling bees. State regulators have estimated that a launch might happen at some point future} between August 2022 and someday in 2024. Arizona is home to more than a dozen on-line sportsbook apps. Each one guarantees varied wagering experiences, strengths and weaknesses, and promotional provides. Sports betting went stay in Arizona in September 2021 to coincide with the start of the NFL season. Both on-line and in-person sports activities betting can be found to Arizona residents and visitors.