The sequel is finally here!

A few weeks ago, I played "Case Zero" which was a prequel to this game, and it was one of my favorite Xbox Live Arcade games of all time. That means this game should automatically be amazing too, right? Kinda....but it's not quite amazing enough to earn that perfect ten score.

First, the good: Dead Rising 2 picks up where the first game (and Dead Rising: Case Zero) left off, with you playing a lone survivor in the midst of a zombie outbreak. The plot is much better this time around, you're a father...your daughter has been bitten...and you need to get her "Zombrex" (the anti-Zombie bite medicine) every 24 hours or she'll become a little monster. This time around, instead of Frank the photographer, you're Chuck Greene, the moto-cross star...who competes weekly on a TV show called "Terror is Reality". This has to be one of the coolest parts of the game.

Terror is Reality is a "Running Man" style show, where you and three other contestants compete to see who can kill the most zombies. The game starts out with a round of "Slicecycles" (motorbikes with chainsaws attached to the handlebars) and you have to kill as many as you can. From what I can tell, in the world of this game...the zombies are sort of like cattle, they are rounded up to be on the game show. Unfortunately for you, somehow...they get loose, and boom...it's a zombie outbreak. You soon find out that you have been blamed for the outbreak, so now you're wanted by the survivors AND the zombies.

The last game took place in a mall, and while this game also has a mall in it, most of it takes place in "Fortune City", which feels a lot like Las Vegas. That means there are slot machines, cash and zombie showgirls all over the place, along with tons of neon lights. It's pretty cool.

This time around, there's plenty of new stuff like multiplayer, online co-op play and of course....the combo weapons. Introduced in Case Zero, this new ability is one of the best things about the game. In Dead Rising, you could always pick up just about anything and turn it into a weapon. In the sequel, any item you see with a "wrench" icon above it can be used as a standalone weapon or combined with another item to build a combo weapon. Combine gems from the jewelry store with a flashlight, and you'll make a lightsaber. Combine a knife with boxing gloves, and you'll have Freddy Krueger hands. There are dozens of combos, and it's really cool to discover and build them.

Ok, so the game sounds perfect right? Not quite. Unfortunately, it has some major flaws.

First off, this title suffers from horrible loading times. Whether you're walking from one area to another or just trying to save your game, chances are you're sitting on a loading screen. It gets annoying...fast...and it NEVER ends.

Second, and probably worst of all..the game has an awful save system. Just like the first Dead Rising, if you want to save, you'll have to find a bathroom. If you forget, or if there doesn't happen to be one nearby right before you're about to die....chances are good that you'll have to play an entire level over again just because you forgot to save. Although I'm pretty good at remembering my saving, this has still happened to me several times already...and it's fucking infuriating when an untimely death costs you an hour of progress. Also...every time you meet a "boss", you better have saved before that...because they tend to kill you pretty easily.

Finally...I have a big problem with the multiplayer. While I think it's awesome that Dead Rising 2 has a multiplayer mode, the execution was horrible. In multiplayer, you can play "Terror Is Reality" mini-games against other people online, and the cash you win can be added to your existing campaign saves. THIS part of the multiplayer is awesome. What's not awesome is waiting 5-10 minutes just to find a match, while watching the same damn cut scene over and over again as you wait. I have no idea why the multiplayer matchmaking is so slow (and seemingly broken), but considering the fact that the game launched this week...I don't think it should be because nobody is playing. I've only played about 5 matches online, but I would have played many more if I could waited through those lobbies. Also...how about letting me start a game with LESS than four people, instead of waiting until there are four patient people in a lobby with me? No dice there...but it would have been nice.

Overall Score? 8.5/10. While this is still probably going to be my favorite zombie game of all time, I think it's got some serious flaws that keep me from saying it's "perfect". Case Zero had them too...but it had such a small world that forgetting to save wasn't an issue, and the long loading times only happened once in awhile, because the map was small. In this game, the map is huge, so you'll be loading every few minutes as you transition from place to place. This is definitely a fun game...and I think I'll be playing it for a long time to come, but it's filled with glitches that make it annoying to play at times. Still a must buy, but it won't be a frustration free experience.

Achievements? Ok...these are freakin HARD. Like many Capcom games before it, the achievements in this one are going to take forever to get. Because I love this game, that's ok with me. Here's what I have so far: 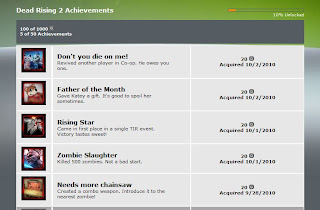