Dead Rising Case Zero is the first of it's kind as far as console games are concerned. It's not a demo, it's more like a "prequel" to Dead Rising 2 (which releases later this month). It's a small, single campaign level...and all of the progress you make in it will be applied to the full game later this month. Other games have had similar demos (where your progress is tracked), but this game basically sets up the story BEFORE you end up in Las Vegas, where the second game is set. Pretty awesome stuff.

Case Zero picks up right where that one left off in terms of gameplay. The zombies are "slow zombies", so if you have a good weapon, you can mow them down easily. It's not "easy", but it is fun, a lot more so than other zombie games that have you scrounging for bullets and running for your life all the time. There are hundreds of weapons you can pick up and use (everything from the town can be used as a weapon, even bowling balls from the bowling alley). Every few levels, there's always a "freak" to fight (usually a fellow survivor who has gone nuts). These guys are faster, and far more powerful than the zombies. Case Zero has one freak in it....and he's pretty tough.

New to the game are "weapon combos", which are pretty amazing. Throughout the town, there are work benches, and you can pick up two different items, place them on the bench...and your character will combine them into something awesome. You begin near a work bench where you can take a box of nails and combine it with a baseball bat. Simple combo, but it works surprisingly well. Later, you'll be able to combine a rake and car battery to make an electric rake that shocks any zombie you see to hell. You can combine a pitchfork and a shotgun to make a "boomstick", which works surprisingly well. The funniest one I've tried so far is an ordinary bucket, and a power drill. The result is the "Drill Bucket", which you place on a zombie's head and then watch as they get drilled to bits and fall down. Then you pick up your bucket and walk away.

Case Zero is set in a small town, which you must explore and defend. There are several survivors to meet and save, and each of them is more interesting than the last one. I don't want to spoil too much, but you meet several people who were recently in Vegas, and they have pretty funny stories of how they ended up stuck in this shitty little town. One of my favorites is a group of girls whose story reminds me a lot of the movie "The Hangover", if that movie had been set in a world with zombies.

The entire campaign only takes about an hour or two once you've figured out all the locations in the level, but I played this game all day long. So far I've beat it three different times and gotten three different endings (I read on the internet that there are five total). I've leveled my character up to level five for the upcoming sequel....and I can't wait to play that.

Overall Score: 10/10. This game is absolutely amazing. It only costs five dollars, and at that price, it's better than almost any downloadable title I can think of. A rich story, tons of re-playability, and all of your progress will transfer to an upcoming game. Capcom gives you quite the bargain here....and if you have an Xbox 360, there is no excuse not to buy this one.

Achievements? I got 180 gamerscore so far in this one, leaving only one achievement to 100% it. I'll definitely be doing that in the near future. 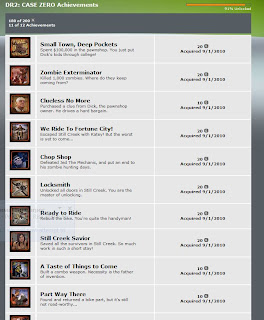