What this game has to do with the Little League World Series? I have no idea.

Your team is comprised of a bunch of kids that looked like they stepped out of a Pokemon cartoon. The baseball game itself is filled with "Special Moves" and powers so convoluted that I actually NEEDED the stupid tutorial just to learn how to play.

I've seen baseball games with "fire" pitches or maybe "super swings" before, but this one elevates the art of "special move baseball" to a new category of "suck". It's almost laughable just how dependent the game is on all of the special crap.

You start out without special powers, and then as you do some basic baseball things (strike someone out, catch a foul ball, throw someone out, etc), you'll gain a bit of progress on your power meter. Once your power meter is full, the real fuckery begins...with fire pitches, "Best Batting" and all sorts of other crap that makes the game feel more like Street Fighter than baseball.

You have to launch "Big Play" fielding (something that makes your character jump really high up in the air if you press the right sequence of buttons) if you want a chance at catching a ball hit by a player who's on fire. You have to have the "big swings" on if you want to hit the souped up fire pitches thrown by a pitcher who's using that special move.

This game reminded me that I want to try that Mario Super Sluggers baseball game (as I hear that's pretty silly as well), but playing this one against the computer was no fun at all. Playing against real opponents might have been ok, but I was only able to try against the computer.

Overall Score? 4/10. This game isn't even as fun as any of the other baseball games I've played so far this year, and that's saying a lot, because I haven't enjoyed them very much. Perhaps Mario Sluggers will be a better game? I've added it to my GameQ

All of the ones I got were for beating the (rather lengthy) tutorials. When I actually got into a game, I didn't unlock anything. Figures. 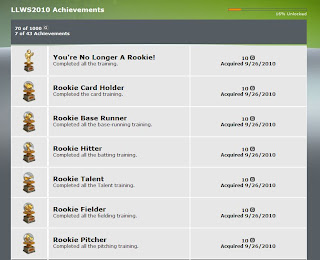