This may be the most brilliant video game ever released.

Truth or Lies is a simple game that uses a Rock Band microphone to record answers to random questions asked either by the computer, or by one of your friends. The computer then analyzes your answers and decides whether you're telling the truth or a lie.

I have absolutely no idea how the system is supposed to work, but I can say that it definitely does not. You can "calibrate" the system by telling it the truth and then telling it some lies, but I'm not sure what it does with that information. I played a 30 minute game of this by myself, and it sometimes thought I was lying when I was telling the truth, or telling the truth when I was lying. Sometimes I made up answers that made no sense at all and it would call them "true".

None of this is relevant to my proclamation about this being a brilliant game.

You see....this game is the perfect party game. It's better than Rock Band, it's better than the Wii, or Kinect or Move. It's better than board games or anything else you can think of....but you have to SELL it. I am totally saving this one for my next party, and then I'm going to unleash it on some unsuspecting guests (who are hopefully not reading my reviews). All this game needs in order to be fun is drunk people. Once you have some of those, I'll bet this is awesome.

So why is it awesome? Simple. You ask your friends questions, and then they speak their answers into a mic. The game records those answers, analyzes them...and spits out a "true" or "false" judgment, and giving you points based on how honest you were (or were not).

Since no one has heard of this game, for all they know...the "lie detector" built into it is just as accurate as the ones you see on TV. Can you imagine how much fun it will be to play the "Hot Seat" mode where you ask your friend a question and then the computer decides whether or not their answer is a lie? I can...and it's going to be awesome.

I should really come back and review this AFTER I play it for the first time with a bunch of drunk people. Maybe I'll update it then. In the meantime, I can say that in playing for about 45 minutes on my own, I was able to unlock about 600 gamerscore. That's pretty crazy, and if you're an achievement whore, you probably want to rent this game just for that.

Overall Score? 7/10. This is a very solid concept that could be great at parties. I could say "WILL be", but I need to verify that first. This game could actually get an 11 rating, ,I'm not sure. In my mind...the fun I'm going to have springing this on people could be a lot more awesome than it actually turns out to be. We'll see. To be continued.

Achievements? This game spits out achievements faster than almost any game I've ever seen. Rent this and grab them. 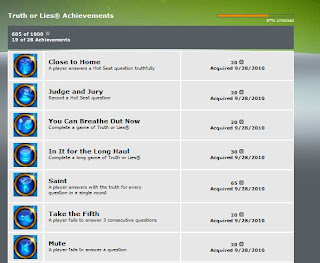 Hahahahaha!!! Ok, I am reading your blog, but I promise not to say ANYTHING when you pull this out at a party. It promises to be too hilarious to mess with. :)