Oh my lord my voice hurts.

I'm typing this up after going over 11 songs into the Solo Tour on Rock Band Metal Track Pack as a solo vocalist. You see, my wife is having a girl's night out (she and her friend are going to a musical), so I have the house to myself...and I figured this was a great night to crank the speakers without embarrassing myself.

I popped in the Rock Band Metal Track Pack and began the process of trying to sing a bunch of songs that I've never actually heard (along with a few that I have). By the end of it, I had four achievements and a very sore throat. I have 105 gamerscore...and I'm sure a cup of tea will help ease the pain of getting it.

What is there to say about this game? It's another self-contained Rock Band game, with 20 songs. If you buy a copy at the store, you get to import them into your Rock Band collection (and seeing as how most of these end up selling for about 20 bucks apiece, that's a pretty good deal if you like the songs on the disk).

I rented this, so I don't get to import the songs, and that's probably ok, because the only ones I would have added to my collection were actually already in it. My Rock Band song collection is in the hundreds these days, so standalone titles like this are only fun for the gamerscore. There are actually a couple of other achievements I could still get...but they require a full band and/or expert skills (two things I'm fresh out of at the moment).

Overall Score? 5/10. Rock Band Track Packs are awesome, and the game itself is a lot of fun, but the set list on this particular one is not my cup of tea. I liked a handful of the songs (and it turns out I already own those), but the rest involved a lot of trashing drums, screaming vocals and shredding guitar that would probably melt my fingers off if I tried it on expert. This one was a good rental for a night, but I'd never play it again. If you're a metal fan though, it's 100% worth the price...and it will save you a lot of cash over downloading these songs individually. Just make sure you don't pick up a used copy, or someone will have already used the song export code for it. 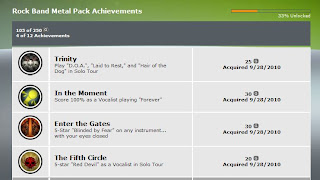