Video game review number two hundred and seventy three in my 365 Games in 365 Days project is "God of War".

I rented this game as part of the PS3 "God of War Collection", because I had never played the originals and I wanted to try them out. Earlier this year, I tried God of War 3, and I really liked it. Although I never beat the game, I definitely still plan to...and playing this one only reaffirmed that mission for me.

To be clear, this is the original God of War from the Playstation, only with slightly updated graphics and trophies added. It's actually kind of a cool concept, and I wish more classic games were updated this way. Halo and Halo 2 maybe? How about Knights of the Old Republic? The possibilities are endless.

Right from go, I liked this game a lot. The action is easy to pick up, and the levels are nice and engaging. There are puzzles to solve, button sequence fatalities and tons of combos to get. The only thing I'd say this version didn't have that I really liked in God of War 3 is the HUGE scale bosses. Don't get me wrong, there are some big ones...but in the first few levels of God of War 3, you're already facing mountain size enemies. I'm not sure if some of those are coming later in this game, but so far...the biggest boss I've encountered was rather normal sized.

I may have to come back and fill in some more details later....but for now, I'm only 2 or 3 levels in, and I liked the game enough to buy it. I've decided that I'm going to completely finish this one before playing God of War 2, and then I'll go back to God of War 3, so I have my work cut out for me.

Overall Score? So far it's an 8/10...and I have to note, I also rated God of War 3 an 8/10 earlier this year, so I think I'll take another look at that score later after I've progressed into it. I'll bet it's going to earn a higher rating on my second play-through, but we'll wait until that happens first.

Trophies? I got a few: 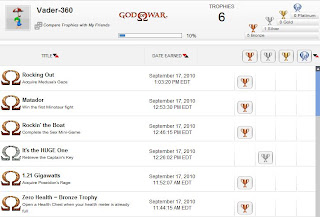