Two games with "family" in the title in the road equals one wild and crazy Friday night, that's for sure.

Actually, I always enjoy a good Karaoke title, and this one is filled with songs from Disney Movies. While you're singing them, the actual scenes from the movie play in the background, so instead of watching some silly avatar dance around, you get to relive childhood memories.

Well, at least in some cases.

I'm aware Disney is still making movies these days and they want to get something for the kids in there, but I would have loved to see more classic Disney songs you hear in the park, like Hi-Ho, or maybe the Pirates of the Caribbean ride soundtrack. They had one song from Mary Poppins, but there are like 5 other great ones from that movie. There were a few songs from the Toy Story movies (which was cool), but only one from the Little Mermaid, which had a ton of good songs.

Set list aside, the game itself is pretty straightforward. You sing, try to get points and unlock trophies. You can sing by yourself or in duets with a partner. I asked my wife if she wanted to sing, and she said no, but then when she heard me sing the "whole new world" song from Aladdin, she went twirling by in the hallway, singing the Jasmine parts for fun. Too bad she didn't do it on mic, I think there's a duet achievement or something.

I cherry picked my favorite songs from the set list, and a few I didn't know...and by the time my voice was sore, I had earned a ton of trophies. It's not a game I'd own, but I bet my little sister would love this one.

Overall Score? 5/10. This is your average singing game, with an all Disney setlist. If you are a huge Disney fan who probably owns all these soundtracks, it's a must own. The way I look at it, it's like "Guitar Hero Van Halen", or some other band specific music game that I don't really feel like I need to buy. I am glad I rented it, it made for a fun little evening of singing...but I think I'm done now.

Trophies: Oh yes, I got quite a few: 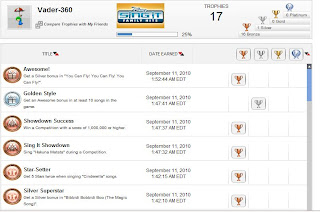