Video game review number two hundred and twenty five in my 365 Games in 365 Days project is "StarCraft 2: Wings of Liberty".

I've said it before and I'll say it again: I have been waiting for this game for over ten years.

It came out a few days ago, but I've been pretty darn busy and wanted to wait until I had the proper time to dive in and start the campaign. Today is not that day, but I woke up early and I just can't wait anymore. It's time to play some Starcraft.

Unfortunately, my PC has not been used to play games much (I'm almost entirely moved over to consoles these days) so I had to do some upgrading of drivers for my video card. It wasn't what I'd call "user friendly", and even though I feel rather capable of such things, I still had to check out the FAQ to find out what was causing parts of the game to work fine while others suffered. Unfortunately, it took up my entire morning, and I had to leave before I could really dive into the game. It was frustrating, but this was most likely a one time deal...so I don't think I'll have to worry about it again.

I've spent a considerable amount of time in the campaign now, playing through the Terran missions. I'm pretty sure that's all this game is (Terran missions), and that's ok with me, as they were always my favorite team to control in the original StarCraft game. You control Jim Raynor again (he was your main character in the first one) and although there are tons of new units and new stuff to build, basically...the game feels like home.

I played through at least 6 missions so far, (unlocked several "achievements" for doing so) and I can't say I've found anything wrong with the game. It's challenging, but it's incredibly fun...and the story is definitely interesting (especially if you're like me and you remember all the old characters, though I don't think it's necessary to have played the first one).

You're considered somewhat of an outlaw these days, so your missions mostly revolve around saving colonists from the aliens (or the oppressive government) and collecting artifacts for cash. At least so far.

I haven't even TOUCHED the multiplayer yet, because I'm enjoying the campaign so much...but I had a taste of it in the beta, so I know it's going to be good.

I can't think of any game I've video played this year that's as good as this one. Some games have come close, but this one is just fantastic. It is everything you could possibly ask for in a sequel, with enough updates to keep it fresh while still staying loyal to the original stuff that made it great. I can foresee hours, if not days and weeks spent on this one....and I plan to take my time with it.

It will take me months and months to get "good" again, and even then, I know I'll never master it. There are plenty of achievements for winning games and stuff, and I assume they'll be very hard to earn....but that won't be my main focus in playing. Instead, I'll be playing this game because I love it. Whenever I get the chance.

Overall Score? 10/10. This game is as good as it gets. I really can't think of anything else I could ask for to improve it. The only thing I'd like to see improved is my own skill, and that will come with lots of practice. If you own a computer, and you like games....you should really own this one.

Achievements? Blizzard has them, and I've unlocked several. Here is a sample of a few of them: 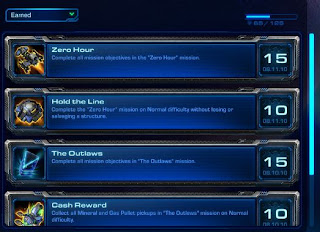