I've been waiting for this game for over 10 years.

In 1998 when this game was released, I was working in the back room at an ISP with a bunch of guys around my age. Most of our work day was spent answering tech support calls, or repairing PCs....but whenever we had a break, we usually had a game of something or other going. For the first year I worked there, it was always Quake or Quake 2. We would shoot it out over the local network, stopping only to help some old lady figure out how to turn the caps lock key off so she could log into her email account. It was a mind numbingly frustrating job at times, but those games of Quake helped keep it fun. Being able to dominate my coworkers while simultaneously configuring someones Dial Up connection to our service over the phone was a badge of honor. Hitting the mute button on the phone to say "Fuck you bitch, if I wasn't on the phone..." was always fun too, unless I forgot to hit mute. :-)

At some point, StarCraft came out and we all switched over to that. I can't remember a day passing where I didn't play StarCraft. I would play it at work, then I would go home and play it there. I'd even log onto the internet with my state of the art 56k modem and play it online. Later that year, I moved to Seattle...and just about every night, I'd play either Quake 2 or Starcraft with my roommates. Sometimes we were taking on strangers online, other times...we'd play against each other on our home network. Very often, the games would go until 3 or 4 in the morning, regardless of who had work or school the next day. One of my roommates played so much StarCraft that his college education was in danger of suffering, so he cracked the disk and taped the pieces to his monitor to remind him to stop playing that stupid game. A few months later, he bought another "Battle Chest" (the game, the Brood Wars expansion and the strategy book from Costco)....and jumped back into matches with us on a nightly basis.

From 1998-2001, there were brief exceptions where I'd play something besides StarCraft or Quake 2. There was Mario Kart 64, Soul Calibur on the Dreamcast and even Unreal Tournament on the PC, but for the most part....StarCraft ruled my life for those three years. This juggernaut over a game was finally dethroned in 2001 when the original Xbox came out and I migrated back to console games. Late night Quake and StarCraft sessions were replaced with Halo parties, and the rest is history.

Over the last ten years, I've picked StarCraft up from time to time. I used to go through campaign missions on airplanes while traveling for business. A few times in the last ten years, I've even gotten together with a buddy and played an online match or two. It's probably my favorite PC game of all time, if only because it's stood the test of time after all these years...even after Quake 2 became outdated and was replaced by better shooters. I've played dozens of other real time strategy games trying to recapture that StarCraft magic, but no game ever has. It's simply the best of the breed.

Tonight, thanks to my friend Amanda, I was lucky enough to get a beta key to play the sequel. I jumped into a match...and instantly knew how to play. Stuff has changed in ten years (the graphics have improved, there are better units and I'm unfamiliar with some of the new menu commands), but this is still StarCraft. I played a match against someone online who was using the Protoss and got thoroughly owned...but I still had fun.

Since then, I've taken to playing games against the computer AI, trying to get my feet wet by fighting the computer instead of fighting against people online who wipe me out in the first few minutes. As close as it is to being perfect, this beta does have one flaw: It's multiplayer only.

In strategy games like StarCraft, Age of Empires or Halo Wars, I've always preferred to take the time to explore the tech trees and figure out the strengths and weaknesses of every unit before you head online to massacre regular people. There's no real option to do that in the beta, short of fighting against mindless computer opponents offline. They're fun and all, but I really wish I could explore the tech tree as God intended me too, in a scripted campaign where I learn the purpose of each unit by fully upgrading it and rushing off to fight some random villain during the story. Unfortunately, the offline option is grayed out, probably because this is a multiplayer beta and they want to get the kinks ironed out on their network (Battle.net) before they ship it later this year. I can live with this...it makes me crave the final version even more than I already do.

As far as the multiplayer vs humans go, well...I suppose I'm not a fan yet. As much as I feel at home in this game, as much fun as it was to play in such a familiar and beloved world again, I feel like I probably won't be fighting folks online the way I used to. I don't want to feel rushed into learning the ins and outs of this game online, I want to play in the campaign and take my time before I start competing against the people who live and breathe for online combat. Zergling rushing and 12 carrier attacks have never been my favorite part of this game...and that's all you find online in the beta. It would be like falling in love with Halo, missing it for 10 years, and then playing a sequel where you only got teabagged over and over again. Not for me.

Again though, these are all small gripes...in a game that is otherwise perfect. The best part of this game is that it's only a BETA...and I have the entire full version to look forward to.

Overall score: 9 out of 10. All the right ingredients are here, except for a campaign. When this game releases, I'll buy and review the full version. I am pretty confident it's going to rock based on the small taste I've gotten so far. The campaign is a big part of the game for me...and I can't wait to play it.

Achievements aren't enabled in this version of the game...so I took a few screenshots from a match I played tonight. I was proud of the outcome. I was the red guys. :-) 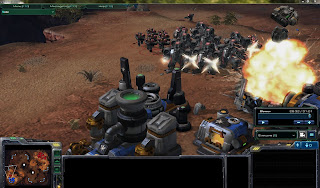