I have played almost every single Soul Calibur game ever made (there's one for the Wii that I missed, but I have it in my rental list from Gamefly). Consistently, I think it's my favorite fighting series of all time, even though Street Fighter 2 probably still takes the title as my single favorite fighting game. The original Soul Edge/Soul Blade game was fairly popular in the arcades, and I remember playing it quite a bit before a sequel was released on the DreamCast as Soul Calibur. That quickly became one of my favorite console fighting games in history...and I have bought nearly every sequel since. This one is the first portable version, and I was worried about what they might do to my beloved franchise.

They've done a fairly good job. First of all, the graphics are beautiful. This game looks a lot like the ones I've been playing on the consoles, and while it's not quite as polished as they are....it's really, really good as far as PSP games go.

The area I was probably most worried about was the controls, as there's not really a substitute for a gamepad or a fighting stick where most combat games are concerned. Broken Destiny is no different. It feels really weird playing this on the PSP, and although I was able to pull off some of my favorite combos from memory, learning the moves of new characters was a lot harder than it was with Soul Calibur IV on the 360. I definitely missed my controller during some of the battles on this one.

The cinematics look great, but the story itself is confusing as hell. Rather than try to explain this to you, I'll offer up a screen shot that I took with my camera phone during one of the cut scenes: 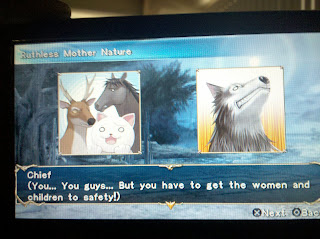 Confused? Me too. This screen preceded a fight with a dude wearing a wolf mask, so I suppose it makes a TINY bit of sense, but honestly....the plot in this game treads far more deeply into "WTF" territory than any of the previous versions. Just as I was wondering why the hell there was a kitty on the screen...they added a disclaimer, just for folks like me who might be paying attention to these screens instead of hitting "X" to bypass them and get directly into the fight: 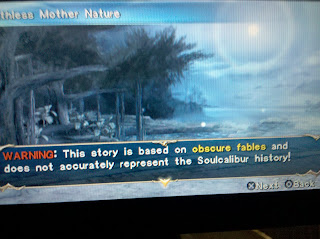 Whew. I'm glad they cleared that up for us.

Overall? 7.5/10. I liked this game a lot, and it's definitely one I would consider buying the next time I am looking for a new PSP game to buy. I know there aren't a lot of examples to compare it to, but I'll go ahead and say it: This is the best portable fighting game I have ever played.
Posted by JoshEEE at 12:26 PM