Shank is a side scrolling "beat-em-up" game done in a really cool animation style. It looks a lot like a comic book, and the cinematics between each level are actually entertaining in a comic-booky sort of way. It's got a lot of weapon variety, a TON of enemies to kill...and some frustratingly difficult bosses that you'll have to play over and over again while learning the patterns.

The game begins with a story that reminded me a lot of Double Dragon. Big muscle man picks your girlfriend up over his shoulder and steals her away...you must pursue and kick the asses of every single one of his friends before you can win her back.

Sounds a little like the Scott Pilgrim game too, I suppose, except the only thing that's really "retro" about this game is that scene.

As I mentioned above, you have lots of weapons in this game, including some knives, double pistols and the chainsaw. There was an achievement for getting 100 chainsaw kills, so I stayed with that initially, until I discovered that the shotgun and "shanks" both work better. Go figure.

I beat the first level in only a couple of lives, and only died the one time because I had a little trouble with the first boss. The bosses are very "pattern" based, so once I figured out his attacks, I beat him easily.

The second level introduced the shotgun, which I carried around for the entire level...and enjoyed a lot. It knocks people back a lot better than the pistols did. There are attack dogs in the second level, and I found them hard to kill and incredibly annoying. Finally...I slaughtered my way to the end boss (an army jeep), which kept killing me over and over again. I kept trying and failing to beat this guy, until I figured out that I needed to ditch the shotgun and use my pistols to beat it. After that, I did it on the first try.

I was enjoying this game, so I continued on through the 5th level, unlocking new weapons and killing bad guys all the way. I began to feel that the story was becoming more of a tale of revenge than one of "saving the princess" (sort of like Kill Bill) which made it all the more interesting. There are a lot of blood and guts in this game, but ultimately...it's pretty simple to pick up and play for awhile, which is the mark of a great arcade game. I can totally see myself playing this whenever I have a few spare minutes.

Overall Score? 8.5/10. I really like this one. It's a lot better than the Scott Pilgrim game and also more enjoyable than most of the other beat-em-ups on Xbox Live that I've played. It doesn't actually feel like an arcade game, but the price is right in line with the rest of them...and I think it's definitely worth picking up. I predict that I'll be playing this one all the way to the end.

Achievements: Here's what I have so far. 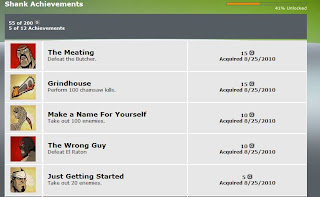