Video game review number two hundred and forty four in my 365 Games in 365 Days project is "Scott Pilgrim vs. The World: The Game"

I played Scott Pilgrim the game after reading a review on Joystiq. Reading their review of this game, one must assume this is either the best movie video game of all time, or the reviewer had just been serviced by several of Ubisoft's "Frag Dolls" (TM) sent out by the publisher to keep the reviewer company while he wrote his review. I'm specifically picturing the scene from Swordfish where Hugh Jackman is working on his laptop while being pleasured by some girl that works for John Travolta. Had something like that actually happened, I could totally understand the glowing review the guy wrote for this game.

I had no "visitors" while playing this, so I'm not sure I can echo his enthusiastic comments, particularly:

"So, yeah, this is awesome stuff. I couldn't recommend it more highly, especially at 10 bucks, and I'm sure you'll be telling everyone you know the same after you clear the first stage (if not sooner)"

Frankly, my first try at getting through the first stage resulted in a nasty game freeze in the middle of one of the "bonus stages". As I was racking up the coins, the screen froze here: 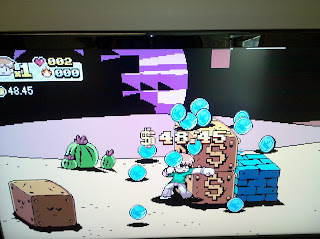 The only way I could recover was to completely shut off my console and start it up again. When I restarted, naturally...I lost all my progress, so I had to begin on the first level all over again. That's not something I'm going to rush out and tell my friends about (though, I probably just did with this review).

My second pass through the first stage was a little easier (I had learned some of the special moves)...but for the most part, I progressed at about the same speed. I was pretty frustrated to learn that at the point where my game froze, I was almost to the end of the first area (and the first game save). Damn....but oh well.

I got to the end, and beat the first boss...presumably, one of the girlfriend's seven exes that you have to defeat to win the game (and the girl, I guess). The fight was exactly the kind of boss fight I was expecting in a game like this, and I conquered it without incident.

This game is made to be a four player game, yet it doesn't support online multiplayer. I'm really not sure what is up with that, and I can't remember the last time I had four people over to my house to play anything besides Rock Band or Halo. I'm not sure if they'd be excited to play Scott Pilgrim vs. the World: The Game or not, but maybe the next time I have four people over...I'll ask. Until then, I'll only get to experience the single player mode.

I suppose I shouldn't continue on as if the single player mode is somehow a bad thing. This is actually a really cool game with retro-styled graphics, and a classic video game soundtrack. If you're "old school", this game is perfect, and if you want to play something that feels old school without actually being old school, this is definitely a good choice.

Like all the NES beat-em-ups, you have some special moves, and you pick up coins on the street to buy food to heal your character. Standard stuff. What's not so standard, is that you can pick up just about everything in the environment to use as a weapon. If this game had come out in 1990, I think I would have crapped my pants from the overload of awesome. Today, it just makes me feel all nostalgic about the days of old...and I enjoyed playing it. I'll probably beat this one, though I won't be in a big hurry to do so.

My overall score is a 7/10. It's not the perfect rating that the Joystiq guy gave this game, but it's still pretty good. I like it...but I don't love it. The game is better than average, but it seems that it was designed for four players (locally, not online) and for me...that's cause for points deduction, not points addition. Perhaps online co-op will be added later, at which point I'd totally bump this score up a little. Until then, it's a solo-mission, which is ok...because that's how games were when I was a teenager.

Achievements? Aye matey...I have a couple. Most of them come later in the game, so I imagine that I will be getting more. For now, here's what I was able to get.