After all those bullshit Tomb Raider games, I needed to play something fun and light. I chose a race game that I'd not really heard anything about, figuring it would be fun to drive for a few minutes. My feeling was not wrong. This game was fun, for a few minutes.

Race Pro is to racing games what McDonald's is to fine hamburgers. Yes, you can play Race Pro and claim that your desires to have a good time driving cars in a video game are being met, but you'd only be kidding yourself. There are many, MANY racing games out there...and I would have a hard time thinking of one that I wouldn't recommend you try before trying this.

Actually, that's not true. Crash Time was a worse racing game than this one. Ah yes, how quickly we forget the crap.

Ok, so why does this game suck? Let me count the ways:

You have no handbrake. I have become accustomed to e-braking my way around hairpin turns in racing games (or at least using the e-brake as an assist as I approach a turn). This game has no e-brake. Hitting the A-button shows you the cars behind you for some reason.

Braking is atrocious. Seriously, if you're coming to any turn that needs to be taken at under 40mph, you almost have to stop your car to navigate it. I have never played a racing game with worse cornering than this one has.

The sounds. I believe they were trying to add a "wind" sound effect, or maybe tires on asphalt, but the result sounds like the games sound effects are being played on a record player, with a worn out needle on a scratched record. OR....being played on a TV that's set to the wrong channel, so you have static mixed in. HORRIBLE sounds.

Graphics: Terrible. Project Gotham Racing 2 for the original Xbox is a better looking game than this game and it's over 7 years old.

Fun factor: Ok, if you want 1000 easy gamerscore (and you can find someone online to play against), this is the game for you. It is incredibly easy to beat the shitty computer racers, even on the "Pro" difficulty. I was able to rack up some achievements on novice, so I turned it up, and up again...and I won my first race on pro without any difficulty whatsoever. If I wanted to grind, I'm confident I could have another couple of hundred of points in an hour or two on this, but I don't want to play it anymore. Driving the race cars in this game is like driving a cement truck in Grand Theft Auto. It feels NOTHING like a racing game is supposed to. Getting a lot of achievements easily is always nice, but it's simply not a fun game.

Overall Score? 2/10. Terrible. This thing is selling for 14.99 used. I'd rather children spend 15 bucks buying boxes of leftover Peeps from Easter, and trying to eat as many as they can. If it doesn't kill them, I assume the vomiting that follows will be more of a memorable experience than playing this game would have been.

Achievements? The one thing this game has going for it? Easy gamerscore. 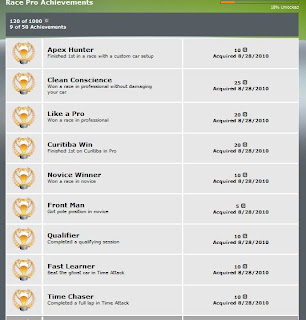