Video game review number one hundred and ninety four in my 365 Games in 365 Days project is "Crackdown 2".

According to xbox.com, the last time I played the original Crackdown was in 2007. It was a fantastic game, and I had a great time with it. At first, this game was kind of a "sleeper" hit, considering most people only bought it to get their hands on the Halo 3 multiplayer beta. Over time, I think people realized that it was actually pretty good...and most people I know remember it fondly.

Three years later, the sequel has arrived...and this time, it's no sleeper. Crackdown 2 was one of my more highly anticipated games this year. I loved the first one, and I couldn't wait for this to come out. After popping it into my console, I feel like I stepped into a time machine.

Suddenly, I'm back in the familiar location of Pacific City, jumping around...looking for orbs and shooting bad guys again. There are some new twists (orbs that run away from you, some new weapons and vehicles) but basically...this feels just like the last one. I'm reminded of the Grand Theft Auto sequels, where they always feel "familiar", but always a little better too.

This is by no means as awesome as the leap from GTA III to GTA IV was, but it's definitely a good sequel. After a brief tutorial, I was leveling up my agent by finding orbs and killing bad guys...and I can see how that's once again going to be very addictive. The battles were still as annoying as hell, and I was getting surrounded by the inhabitants of Pacific city incredibly quickly.

You can pull some crazy stunts in this game, either with cars or on foot (depending on the power of your character). The engine is pretty ridiculous once you're all powered up. You can pick up cars, throw them, stick them to walls...etc, etc. You can jump 5-10 feet at first, 15 feet later, and eventually...over 20. It makes you sort of like Spider Man, and it's a lot of fun.

Driving the agent buggy is still an insane ride (and super fun). The first time I got behind the wheel, I started doing donuts in the middle of crowds of bad guys, with the turret going the whole time. If the folks in Dawn of the Dead has the Agency Buggy...they'd all still be alive right now.

Jumping from place to place is still pretty addictive....and even though my character isn't powerful enough to make insane jumps yet, it's still fun...even as a beginner. I'm not sure what else I can say. It's good to be back in this universe again. If you haven't played this series before, you owe it to yourself to try this one out. If you enjoyed the first one....you'll be welcomed back like no time has passed at all.

Overall Score? 8/10. This is a really good game. It's not groundbreaking as far as sequels go, but it's awesome just the same. Clearly, they felt they had a winning formula and chose not to mess with it very much. I imagine I'll be dumping hours into this one eventually. I really like the co-op modes (you can set your game to allow anyone to join, or play only with friends). I plan to start jumping around with my buddies as soon as I earn myself some better skills.

Achievements? Got quite a few so far: 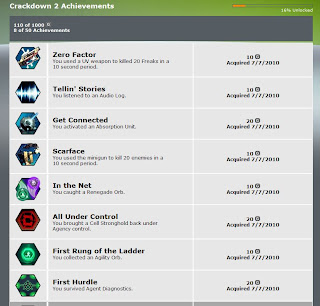