Video game review number one hundred and sixty two in my 365 Games in 365 Days project is"Dead to Rights: Retribution".

I was never a big fan of the first Dead to Rights, but I thought I'd give the sequel a try...and see what kind of progress seven or eight years can buy.

The concept of Dead to Rights is a decent enough one. It seems that you're a cop, with a dog....and together, you fight bad guys. Hollywood has made a few terrible movies based on this premise (Turner & Hooch, K9 and even Top Dog with Chuck Norris), but until the first Dead to Rights...no video game had properly tried this magic formula.

There have been better "dog sidekicks" since Dead to Rights (the pup in Fable 2 jumps immediately to mind), but Shadow is probably still one of the most notorious game dogs out there. He's sort of a badass, and whenever I think of the first game, I always remember Shadow first, and "whatshisname" second.

You start the sequel as Shadow, defending Whatshisname from a bunch of Triad gangsters. Whatshisname (AKA Jack) is all beat up for some unexplained reason and it's up to the dog to save the day. Luckily, you have all sorts of awesome doggie special moves at your disposal, including silent kills, heartbeat sensing and the ability to "sick balls". There's an achievement for using the latter ability, which I got almost immediately. It's pretty funny how the dog goes from being this flesh chomping monster one second, and wants belly-rubs the next. As this friendly killer dog, you make short work of your opponents and head on to the next level, which is a flashback explaining how Jack got injured.

The controls with Jack are similar to the original game. There's still "bullet time" (which was awesome back when the first game was being designed and the Matrix had just been released on DVD), and you still have quick button press combat combos. Within only moments, I found that I absolutely hate the fighting system in this game, and transitioning between fists and guns is like escaping Shawshank penitentiary. While the goal is simple enough, getting to your destination requires swimming through a river of shit.

Jack has to handle a hostage situation on the 97th floor of a skyscraper, and fights bad guys all the way up. I say "fight", but mostly, I'd shoot them. I'd only fight when I ran out of bullets, because hand to hand combat is not a lot of fun in this game. From time to time, you'll get to execute a finishing move, and that's awesome...but the rest of the time, it's awkward combo city. Don't ever try to swap between guns and hand to hand combat though, because...well...you'll feel Shawshanked again.

I made it to the top of the tower, beat the level...and moved onto the next. Again, it was time to be the dog. I wonder if this will be the formula for the rest of the game. Actually, I don't really wonder...because I don't really care. This isn't a bad game, but it's not good enough to keep me playing.

Overall score? 6/10. Slightly above average, but certainly nothing to get excited about. When Heather walked into the room, she wanted to know why everyone had a square head. She called them the "Square blocky-faced guys". She liked the dog, until she saw him dragging bodies around, at which point she decided it didn't look like the best game ever. I tend to agree. It certainly could use some fine tuning.

Achievements? Yeah...they aren't too bad in this game. If I were to keep playing, I could get quite a few of them, but the question is...will I keep playing? Let me shake the 8-ball. All signs point to "No".

I have highlighted the one I thought was pretty awesome though. It's one of the first ones you get...and the game might just be worth trying to experience it. :-) 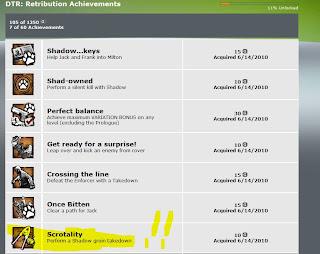