Video game review number one hundred and thirty six in my 365 Games in 365 Days project is "Backyard Sports: Sandlot Sluggers"

Last month, I played and reviewed Backyard Football. This game is the sequel (of sorts) and features kids playing sports again.

First of all, I have to admit, I liked this one better than MLB 2K10, which I reviewed in March. I realize it has nowhere near the depth of that game, and the graphics are nowhere near as good...but it was more fun to pick up and play. Perhaps my gameplay tastes are just too simple, who knows?

Right of the bat (pun intended), hitting is sort of hard to figure out, but eventually...you pick up the timing and then it's easy. I wasn't able to really control the distance or direction of my hits...but I was able to consistently get on base.

Pitching is easier, but batters tend to hit whatever you throw eventually. I also found it almost impossible to throw a ball, unless you were actually trying to. The opposing team pitchers almost never walk you either, and I can see why there's an achievement around getting walked. It will probably be pretty hard to get.

Base running is fairly straightforward, unless you have multiple runners and want to have only one take off. In that case, it's a little more difficult, and you'll also often get picked off trying to get anything but a single out of a hit deep into the outfield.

In addition to all the standard baseball stuff, this game adds Power ups (freeze the outfielders with an ice ball, throw slime on the screen to confuse the batter, rocket balls and bats, etc, etc). I didn't find these to be very useful while on defense, but offensively, they work great. You earn maybe one or two per inning.

Overall? This game is a solid 7/10. It reminded me a little of "Little League Baseball" for the NES, which was one of my favorite baseball games of all time back in the old days. I realize it's not as complex as most of the games of today, but that's pretty much what I like about it.

Achievements? Not as easy as the ones in the Backyard Football game, but I got quite a few so far: 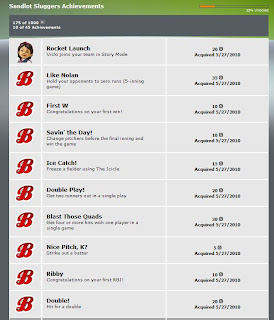