Remember Wipeout for the PS2? This game reminds me of that one, if it lacked the cool music, great graphics and fun gameplay.

Fatal Inertia has you racing these bland little spaceships around beautiful landscapes that were generated by the Unreal Engine. Imagine playing Mario Kart on some of the multiplayer maps from Halo, only without any of the fun of Mario Kart and you've got a vague idea of what this game is like.

The spaceships aren't fun to control. The "gas" button is "A", brake is X (something that I hate in driving games), and the triggers are reserved for doing barrel rolls. Barrel rolls are the move you use if you'd like to crash into mountains, rocks, other spaceships....or occasionally, shake a magnetic weapon off of your ship if you're lucky.

That's right, this is also a "combat racer". The weapons are mostly projectiles (Magnets, rockets, EMPs, and smoke screens). They are all bland and unimpressive, even when you are able to land a direct hit. The one weapon I really enjoyed was the "Cable". Much like Luke Skywalker in the Empire Strikes Back, you can launch your cable at an opponent, tying them to a long string which you can attach to a rock, another ship or your own ship. It's a lot of fun and the physics of this particular weapon are pretty interesting.

Still...at it's heart, this is just a really bland racer with bland combat. The tracks are short (which is nice, because the game is boring)....but even after unlocking several achievements, I wasn't compelled to keep playing after I easily beat the first "cup" of races.

Overall score? 4/10. It would have been a 3, but I played it on April 10th, so I thought that would be a better score for this game. 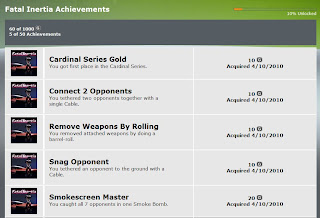