I have heard nothing but great things about this title, so when I finally got my hands on it today, I was excited. It's been reviewed well by just about every outfit I've seen online...including Penny Arcade, which I almost always trust. I even waited to play it until Heather was awake, because I'd heard it had such a good story that she might want to watch it along with me.

Perhaps you have to be a RPG fan to really love games like this, but I just couldn't get into it. It's true that there's an interesting story here, but in order to participate in it...you have to perform really mundane tasks, which are slow and repetitive. You start out as a father. You get up, you brush your teeth, you take a shower, make a cup of coffee, turn on the music in your living room. Each of these actions involves waggling your controller using the motion sensor, or pressing a series of buttons in perfect order. You do a lot of other stuff by rotating the right stick around. Eventually, when you've completed enough of the day to day stuff....you are rewarded with a little more plot.

This reminded me a lot of the mini-games in Fable 2...where I'd sit there and hammer out swords, or chop wood...sometimes for ten minutes at a time, just to earn enough gold to buy something that I needed. I believe this is called "Grinding". That's what this game feels like.

Of course...with many games that require you to grind, there are also often shortcuts. Heavy Rain is no different. There are a scripted set of events to complete each level, and once I opened up an IGN guide, the game became more fun. Heather read out my objectives to me...and I'd click them off one by one. Whereas the prologue took me nearly an hour to complete...we progressed through the next three levels in half that time. It was a lot more fun this way.

Maybe I have A.D.D, or I lack the patience to slog through combing an entire crime scene for evidence before finding out what happens next in the story. I know that's what bugged me the most about the CSI Game. Still, with the guide...this game got a little more interesting, and I wanted to see what happened next...sort of.

Right now, my overall score stands as about a 6/10. It's something new, which is cool. The story is good. The controls are interesting (not fun, not terrible...just interesting), and with Heather reading the objectives out to me, I have to say...I wanted to keep playing. However, we eventually switched over to some TV, and when I asked if she cared what happened next in the story of Heavy Rain, she didn't really. Neither did I.

I may rent or borrow this again sometime...but it's not a buy, and I'm returning it to GameFly in the hopes I'll get something more interesting in return.

Trophies? I've gotten several, but you can't see what 5 of them are because they are SEKRETS. All you can see is when I unlocked them, so that you know I'm not full of shit when I say I did indeed earn them. 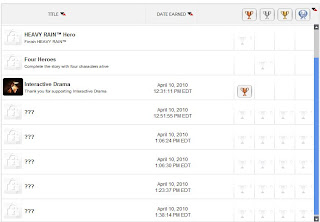