I've never claimed to be a big sports fan. I like baseball and football, but I don't paint myself blue for the team or camp out for tickets. These things are strictly reserved for comic conventions (which I do enjoy). When I was 12, I could probably recite the stats of my favorite teams, but these days...I can't do that anymore. It's safe to say though, that I have a good understanding of most professional sports. I'm a casual fan, which means I enjoy watching and sometimes playing certain sports...but I'm not a season ticket holder anywhere or anything.

Over the course of a year, I'll usually see about ten baseball games. I'll go to a football game if I can get some tickets, and I used to go to basketball games before Seattle's NBA team was sold to some poor Okie who didn't bother to look up their win-loss record before he bought the team. When it comes to the "big three" sports, I've got them covered, and I've played video games featuring them all.

There are other sports, which I might have played video games for in the past. Boxing. Tennis. Golf. Bowling. Hockey. Hell...I even played an Olympics game for this challenge a couple of months ago. Still, there's one sport that I've never been interested in playing a game for. Or watching on tv. Or going to a live match for. Or playing. Judging by the game I'm reviewing in this post, can you guess what this sport is?

Fifa 10 is the latest in a series of soccer games by Electronic Arts that I've never cared about. I've never played one of them. As far as I'm aware, I've never met anyone in the United States who has played one of them without being paid to do so as a game tester. In fact, up until a few years ago, I don't even think they released these games in the United States. I think they were exclusive to the rest of the world (or at least all the countries that care about soccer).

Lately though, soccer fever is creeping into our country. Far more disturbing than the expansion of NASCAR (which is pretty disturbing), the spread of soccer means that eventually, someday...I might actually have to learn something about this game. Seattle has a pro-team now (I think they're named the Xbox 360 something or other)...and they sell their tickets out quite often. The day may come when I care, but that day is not today.

This game is exactly what I thought it would be. You kick a ball back and forth, FOREVER...hoping that eventually the game won't end in a tie. The video game is as boring to play as the real life sport is to watch on TV. The only fun I've ever had with real soccer was playing it at recess in 6th grade, or playing the simulator where you kick a real ball into a real net at Gameworks, and then watch your digital character score goals based on how well you kicked it. This game is not as fun as either of those things.

Thankfully, because this is an EA sports title, there are plenty of achievements you can get that have nothing to do with playing the sport itself. I got a few for uploading replays and photos. I got another one for creating an avatar online and downloading it in the game. I got a couple more for kicking practice goals in the "arena" mode. I have to admit, I enjoyed the arena mode, it's pretty fun. Of course, eventually...I played an actual game...and that wasn't so fun. I didn't score a goal once. The computer didn't score a goal once. We just kicked it back and forth, forever...until I finally quit. That's when I knew it was time for me to call it a day with this one.

Achievements? Look how many I have here, none of which involve playing soccer against another team. Cool, right? 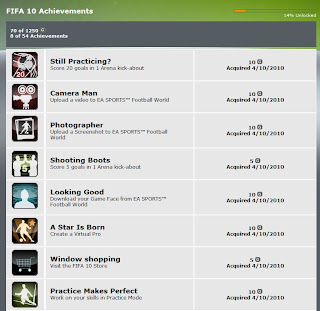