Ok, so the concept here is really cool. What if the classic characters from the DC Comic Books got into a fight with the folks from Mortal Kombat? I'm sure this is a question that has been asked countless times in lines for movies like "Spider-Man" or "Wolverine Origins", and finally...someones wet dream came true and this game was created. I can't mock the idea, because I'm hoping someday there is a Star Wars vs. Star Trek game made just for me. It could be just like this game, and I'd play it every day. I imagine myself controlling Captain James T. Kirk and bitch slapping that stupid whiny prequel Anakin. Or maybe I'd have Darth Vader force choke the shit out of William Riker, right before I pulled off a fatality move where the Sith Lord uses the force to shove that stupid trombone right up Riker's butt.

Unfortunately, this game stars a bunch of characters I am ambivalent towards vs. another bunch that I'm not too familiar with. Yes, it has Batman, Wonder Woman and Superman from the DC Side and yes...they dragged Scorpion and Sonya out for another sequel from the Mortal Kombat team....but I guess I never really cared to control these guys again. None of them have starred in a great video game for the last 20 years. On the DC side of the equation, I don't think there's EVER been a good superhero game, unless you count Lego Batman, which is more of a Lego game than a superhero game.

There's a campaign and it's actually pretty cool in a way. You start out as the Flash, and you go through various scenarios where you learn a part of the story, and then cut to a fight. I wish there was a way to just watch the story (it wasn't half bad), but try as I might...I'm just not a big fan of the Mortal Kombat fighting system. After the first 3 or 4 fights, I found myself getting owned by the computer. The only way to counteract that is to spam the same complicated counter over and over again. There's no "free flow" aspect (like Soul Calibur, Tekken, Virtua Fighter, DOA, etc), and that's why I've never been a fan of the series.

Overall, 5/10. Purely average. If you like Mortal Kombat and you like DC, this is truly your dream game. If you are a big fan of either...it's probably still worth playing. If you don't care much about either one...skip this game and get one of the other fighters I mentioned above. :-)

Here are the achievements I unlocked: 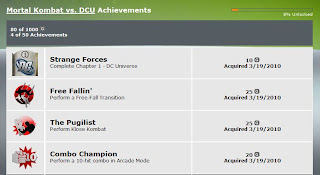